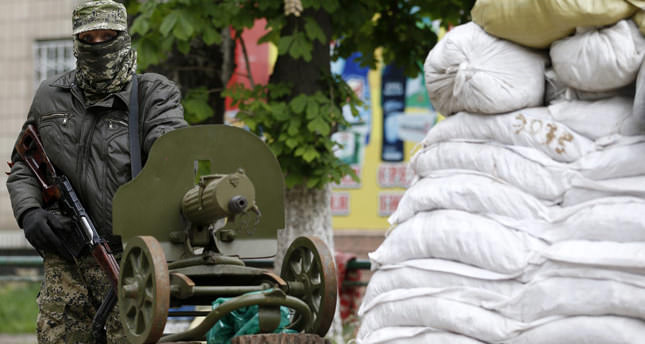 MOSCOW — For the last couple of days, Russian President Vladimir Putin has taken significant steps that can lead to a change of events in the crisis of eastern Ukraine. All statements made by the Russian government would point to an apparent softening of Putin's attitude toward the pro-Western Ukrainian government, the EU and the U.S. It is widely believed that his decision to pull Russian troops from the Ukraine border is a tactical withdrawal that would in turn have some economic advantages in the long run.

Looking at past developments, Putin's insistence on maintaining military control over Ukraine's border reflected itself in strained relations between Kiev and Moscow, but Putin's latest statements prove that Russia is ready to move in the direction of de-escalating tension in favor of anticipated advantages. Even though Russian has claimed that its troops moved from the border, U.S. State Department spokesperson Jen Psaki said at the daily press briefing on May 7 that there is no official proof. "There are a range of de-escalatory steps that Russia certainly could take. Obviously, moving troops from the border would be one of them. But as you know, Russia made similar claims back in March and didn't deliver on that promise at that time."

On May 7, the Russian government stated that a "national dialogue" should be established between the Kiev government and pro-Russian rebel groups to ease the ongoing tension while calling on both parties to come to an agreement. Russian officials also added that holding a presidential election could only be possible under a peaceful atmosphere where the conditions for dialogue have been fully met. Their statements over the upcoming presidential elections have changed within a few days. Kremlin officials also stated that Russia will recognize the presidential elections that will take place on May 25 if the Kiev government stops military operations against pro- Russian rebel groups. There has been a growing concern over the upcoming elections due to the fact that any possible threat would risk the future of the Ukrainian people. Russia's latest conciliatory statements over its support for holding democratic elections in Ukraine may prove that Russia, the EU and the U.S. have finally reached an agreement over the Ukrainian crisis.

Another significant issue is that Putin has proposed a delay in the May 11 referendum. The creation of a sovereign People's Republic independent of Kiev's rule was proclaimed by pro-Russian separatist groups in Donetsk. Right after Putin's statement, rebel groups in Donetsk declared that the independence referendum will take place on Sunday, despite Putin's claim of halting the it. The underlying reason for Putin's decision is apparent. It is believed that after the independence of the city of Donetsk, many more eastern cities - Odessa, Lugansk and Slayvansk - would head to create their own sovereignty, thereby declaring independence. All these developments would lead to a divided Ukraine and damaged relations that cannot be mended between Russia, the EU and the U.S. "We believe the proposed May 11 referendum is both illegal and illegitimate. And we need to see more from President Putin than simply calling for it to be postponed," said Psaki.

Considering the latest statements from the Russian government, it can be concluded that EU and U.S. sanctions have had a significant effect on Russian policy over Ukraine so far. The international pressure coming from EU member states has succeeded in pressuring Russia to change its policy. The Southern Gas Corridor Project, which is seen as the "New Silk Road" connecting transport and energy links between Europe and the Caspian, would provide a great opportunity for European countries to receive oil supply while carrying Azerbaijani gas from the Caspian Sea to Europe via Turkey. It is expected that this new project will create alternatives for Europe to diversify away from Russian supplies. Turkey as a transit country would also expect to reduce its dependence on Russian supplies. This would lead Russia, a main market for natural gas, to take some precautionary measures regarding its oil supply.

As Russia's next step over Ukraine is still unknown, the measures taken by European states will be highly influential for Russia's part.

However, what Russia plans to do is a highly controversial issue and impossible to predict. The only thing that both parties have settled on so far is that the ongoing violence should be stopped.