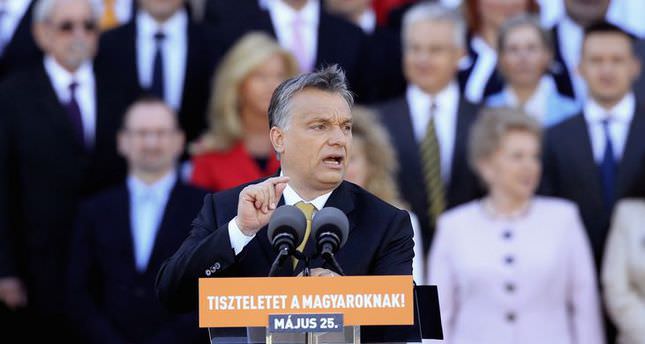 by Anadolu Agency May 11, 2014 12:00 am
BUDAPEST — Hungary will stand up for its rights within the European Union and wants autonomy for ethnic Hungarians living beyond its borders in central Europe, including Ukraine, Prime Minister Viktor Orban said on Saturday.

Orban, who was formally endorsed by parliament as prime minister for a second consecutive term after last month's landslide election win, said ethnic Hungarians supported his policies to unite the nation "above the borders".

He has never suggested reuniting the lost territories with Hungary, but his activities have irked governments in some neighbouring countries.

He said on Saturday the issue of ethnic Hungarians was especially topical due to the situation in neighbouring Ukraine, where around 200,000 ethnic Hungarians live, who are entitled to Hungarian citizenship and also the right to self-administration.

"This is our clear expectation from the new Ukraine which is taking shape now," Orban said, adding the new administration enjoyed Hungary's support in its efforts to build a democratic Ukraine.

Many Hungarians today view the 1920 Treaty of Trianon as a national tragedy because it took away two-thirds of the country's territory and left millions of ethnic Hungarians living in what are now Romania, Slovakia, Ukraine and Serbia.