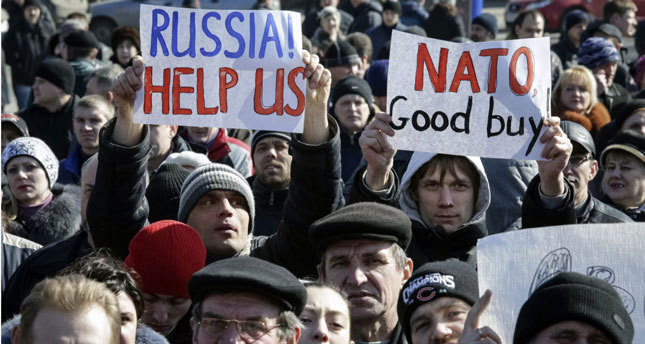 by Associated Press May 12, 2014 12:00 am
DONETSK, Ukraine — Pro-Moscow insurgents in eastern Ukraine declared independence Monday and sought to join Russia, undermining Ukraine's May 25 presidential election, strengthening the Kremlin's hand and putting pressure on Kiev to hold talks with the separatists.

Russia signaled it has no intention of subsuming eastern Ukraine the way it annexed Crimea in March. Instead, Moscow is pushing to include eastern regions in negotiations on Ukraine's future suggesting that Russia prefers a political, not military, solution to its worst standoff with the West since the Cold War.

Such talks are central to a potential path toward peace outlined Monday by the Organization for Security and Cooperation in Europe. The plan laid out by Swiss President Didier Burkhalter calls on all sides to refrain from violence and urges immediate amnesty, talks on decentralization and the status of the Russian language. That's a key complaint of the armed insurgents who have seized power in eastern regions and clashed with government troops and police.

But it's up to the Ukrainian government to take the next step.

Acting Prime Minister Arseniy Yatsenyuk pledged Monday to hold talks with those in Ukraine's east. But he gave no specifics and did not address Sunday's vote or the declarations of independence by the Donetsk and Luhansk regions.

"We would like to launch the broad national dialogue with the east, center, the west, and all of Ukraine," Yatsenyuk told a news conference in Brussels, adding that the agenda should include changes to the constitution to give more power to the regions.

Ukraine's central government and the West say Moscow has encouraged weeks of unrest in eastern Ukraine in a possible attempt to grab more land. Russia says that's not so and accuses the West of meddling in Moscow's backyard.

The interim Ukrainian government's room to maneuver is shrinking.

With a national presidential election scheduled in 13 days, the regions of Donetsk and Luhansk declared independence Monday, and those in Donetsk even asked to join neighboring Russia. The sprawling areas along Russia's border, home to about 6.6 million people, form Ukraine's industrial heartland.

Wearing an ill-fitting suit and reading his speech from a laptop, he continued.

"The people of Donetsk have always been part of the Russian world, regardless of ethnic affiliation. For us, the history of Russia is our history," he said.

White House spokesman Jay Carney said Monday the United States does not recognize the results of the vote, and is focusing on making sure Ukraine's presidential election take place as planned.

But that is starting to look in doubt: Luhansk spokesman Vasily Nikitin said his region will not take part in the presidential vote.

The interim government in Kiev had been hoping the presidential vote would unify the country behind a new, democratically chosen leadership. Ukraine's crisis could grow even worse if regions start rejecting the presidential vote. Dozens have been reported killed since Ukrainian forces began trying to retake some eastern cities.

Voters "have chosen that path that has enabled the formation of an independent state the Luhansk People's Republic," self-declared "people's governor" Valery Bolotov told a cheering crowd Monday in the city of Luhansk.

Bolotov stopped short, however, of declaring the region's desire to join Russia.

Bolotov made his announcement flanked by two rifle-wielding men in camouflage and in front of a pair of brothers in traditional garb who had just performed a lusty folk tune in praise of the Donbass region, of which Luhansk is part.

The insurgents said turnout topped 70 percent, but with no international election monitors around, the claim was impossible to confirm.

"The farce, which terrorists call the referendum, will have no legal consequences except the criminal responsibility for its organizers," Ukraine's acting President Oleksandr Turchynov said in a statement.

In Moscow, Russian President Vladimir Putin's office voiced hope that the OSCE could help broker talks between the central government and the two provinces. The cautious stance which contrasted with Russia's quick annexation of Crimea after a separatist vote there appeared to show Russia favoring a negotiated solution.

Switzerland's Burkhalter, whose country currently chairs the OSCE, met with Putin last week and spoke with the Russian leader again by phone Monday about resolving the Ukrainian crisis.

"We have seen in Moscow that there is openness for a dialogue," Burkhalter said. He said Ukraine has accepted a proposal to nominate Ambassador Wolfgang Ischinger of Germany as the OSCE co-moderator for the talks.

Burkhalter outlined some of his plan Monday in Brussels, where the European Union's foreign ministers added 13 people and two firms to their visa ban and asset freeze list over Ukraine, according to two officials who spoke on condition of anonymity because the measure had yet to be officially announced.

The U.S. and the EU, which have slapped travel bans and asset freezes on members of Putin's entourage after Russia's annexation of Crimea, have warned they could target entire sectors of the Russian economy if Moscow tries to derail Ukraine's presidential vote.

Russian Foreign Minister Sergey Lavrov said Moscow saw no need for another four-way meeting between Russia, the United States, the EU and Ukraine following their talks in Geneva last month, saying that the Ukrainian authorities should now focus holding a dialogue with the east.

The Foreign Ministry criticized the EU for its "inarticulate reaction" to the OSCE plan, and said by refusing to recognize the referendum Sunday, the EU "undermines its credibility as a partner" in resolving Ukraine's crisis.

Last week Putin had urged the organizers to postpone the balloting in an apparent attempt to distance himself from the insurgents.

Turchynov and Ukraine's caretaker government came to power in February following the ouster of Kremlin-friendly President Viktor Yanukovych after months of protests in Kiev. Moscow and many in Ukraine's east have accused the new government of intending to trample the rights of Russian-speakers.