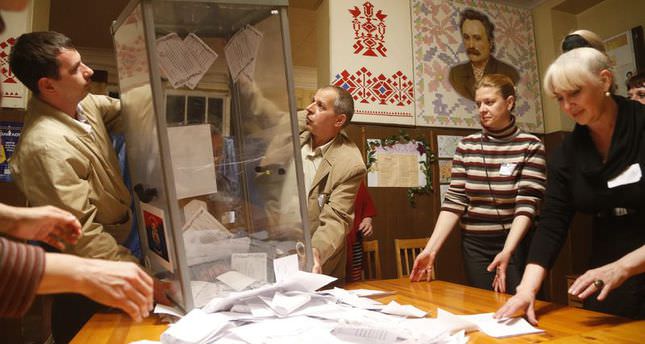 by Associated Press May 12, 2014 12:00 am
DONETSK, Ukraine — About 90 percent of voters in Ukraine's sprawling industrial heartland backed their regions' sovereignty in controversial referendums, which the Ukrainian government and the West have rejected as illegal, organizers said Monday.

The pro-Russian insurgents who organized the vote said the ultimate status of the regions would be discussed later and could include the possibility of secession or annexation by Russia.

Ukraine's central government and the West have condemned the balloting as a sham and a violation of international law, and accused Moscow of fomenting the unrest in a possible attempt to grab more land weeks after the annexation of Crimea.

Russian President Vladimir Putin had urged the organizers to postpone the vote in an apparent attempt to distance himself from the insurgents and keep his hands free for bargaining with the West on defusing the crisis.

His spokesman, Dmitry Peskov, was quoted by the Kommersant daily Monday as saying that it was difficult for people in the east to heed Putin's call because of fighting in the region.

The insurgents in the east have seized government buildings and clashed with government troops and police over the past month. More than 30 people have been reported killed since Ukrainian forces began trying to retake some eastern cities from the insurgents.

Sunday's voting in the two regions with a combined population of 6.5 million appeared mostly peaceful, but armed men identified as members of the Ukrainian national guard opened fire on a crowd outside the town hall in Krasnoarmeisk, and an official with the region's insurgents said people were killed. It was not clear how many.

The bloodshed took place hours after dozens of armed men shut down the voting in the town.