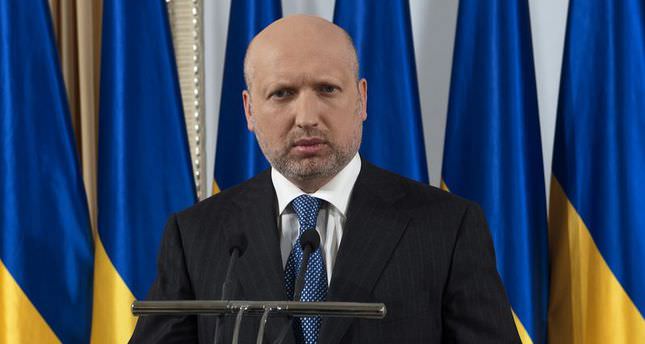 by AA May 12, 2014 12:00 am
KIEV — Ukraine's interim President slammed the "self-rule" referendum by Pro-Russia groups in two eastern regions on Monday saying it has no "legal basis" and the organizers would be "punished."

Pro-Russia groups declared victory with nearly 90 percent of the vote in favor of "self-rule" referendums being held by pro-Russia separatists on Sunday in a bid to split from Ukraine.

Interim President Oleksandr Turchynov described the referendum as a "propaganda farce without any legal basis" in a written statement.

He said his government was ready to hold talks with Pro-Russian "rebels who do not have blood on their hands."

The U.S. and the EU said they will not recognize the result of a referendum on self-rule held by pro-Russian separatists in eastern Ukraine, calling it illegal.

Another move came from Canada which also said it would not recognize the results of the "so called" referendum.

Ukraine's Defense Minister Mikhail Koval said in a televised interview on Sunday that nine soldiers have been killed in operations against pro-Russian separatists in eastern Ukraine since mid-April.