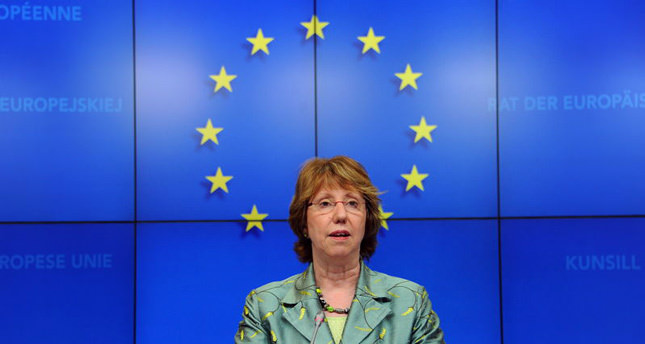 by AA May 13, 2014 12:00 am
BRUSSELS — The European Union's foreign policy chief Catherine Ashton reaffirmed on Monday that EU would not recognize any of the "so-called" and "illegitimate" referenda staged on Sunday in parts of eastern Ukraine.

"We were very clear as well in our position regarding the so-called 'referenda:' The EU will not recognise any illegitimate and illegal 'referenda,'" Aston said after a meeting at EU's Foreign Affairs Council.

She urged Russia to take effective steps to fulfil its commitments made in April 17's Geneva Statement, which sets steps to de-escalate tensions and restore security for all citizens in Ukraine.

At the meeting, the council agreed on a new set of sanctions against 13 people considered responsible for the crisis. The latest set of sanctions brought the number of people subject to asset and travel bans to 61.

"The EU gives its strong support for the holding of free and fair presidential elections on 25 May. This is an opportunity for the people of Ukraine to decide on their own future," Ashton said.