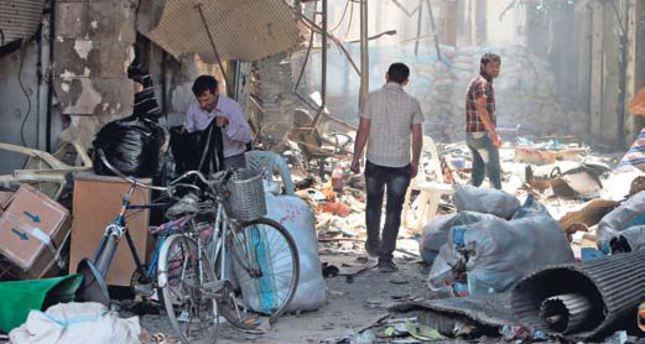 PARIS — French Foreign Minister Laurent Fabius said on Tuesday during a visit to the U.S. capitol that in recent weeks the Syrian army has used chemical weapons. "We have at least 14 indications that show us that, in the past recent weeks again, chemical weapons on a smaller scale have been used, in particular chlorine,"Fabius told a news conference through an interpreter. "Right now we are examining the samples that were taken."

Fabius made the comments during a visit to Washington where he discussed the crises in Syria and Ukraine with his American counterpart John Kerry. Fabius said the Assad government had handed over 92 percent of its chemical weapons stockpile under an international agreement overseen by the Organization for the Prohibition of Chemical Weapons (OPCW). But France believed the Assad government was hiding some of the stockpiles and the reports involving chlorine gas attacks indicated he still had the ability to produce chemical weapons. "What it shows is that [the] Bashar Assad regime in spite of its commitment continues to be able to produce chemical weapons and use them," Fabius said.

He pointed at France's efforts within the U.N. to refer the three-year-old civil war in Syria to the International Criminal Court for possible prosecution of war crimes and crimes against humanity. The 15-member council is due to meet on Wednesday to discuss the draft and it could be voted on within days, diplomats said. But Russia, a veto-wielding council member and ally of Assad, has made clear it is against such a move.

The OPCW is considering a fact-finding mission on its own to investigate the reports of chlorine gas attacks, sources told Reuters last month. Syria has promised to hand over or destroy its entire arsenal, although it still has roughly 7.5 percent of the chemicals it declared to the OPCW and has not yet destroyed a dozen production and storage facilities.

Speaking alongside his Italian counterpart at the State Department, Kerry later said the international community needed to insist that Syria fully comply with its commitment to dismantle its entire stockpile. "We will remain vigilant until this is achieved," Kerry added.
State Department spokeswoman Jen Psaki told a daily briefing that the U.S. would support any effort to investigate allegations of chlorine attacks by the Syrian government.

But Psaki said the U.S. believed the removal to date of 92 percent of Assad's stockpile was a "significant step." "Clearly the removal of 92 percent of declared chemical weapons in Syria is a step that we think is an important step forward, and one that we continue to stand by as the right step and the right process we took last September," she added.

Meanwhile, Human Rights Watch on Tuesday said that, there is strong evidence that the Syrian army used chemicals weapons on three towns in northern Syria in mid-April 2014. The New York-based rights group said that evidence strongly suggests that Syrian government helicopters dropped barrel bombs containing with cylinders of chlorine gas on towns in northern Syria. "These attacks used an industrial chemical as a weapon...the Syrian government is the only party to the conflict with helicopters and other aircraft," said the watchdog.
On April 11, Assad's regime and rebel groups exchanged accusations over a poison gas attack in the opposition-held village of Kfar Zeita, in the west-central province of Hama, 200 kilometers north of Damascus. "Syria's apparent use of chlorine gas as a weapon - not to mention the targeting of civilians - is a plain violation of international law. This is one more reason for the U.N. Security Council to refer the situation in Syria to the International Criminal Court," added the group.
Last Update: May 15, 2014 1:54 am
RELATED TOPICS