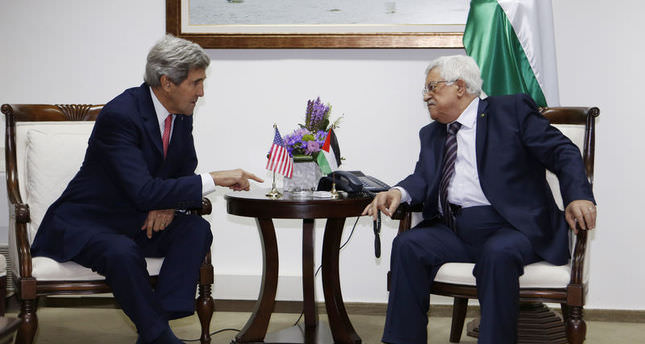 During the meeting Kerry emphasized that the "door remains open to peace" talks although made clear it was up to the Israelis and Palestinians to take the necessary steps to resume talks, a senior State Department official said.

The official said Kerry urged both the Palestinians and Israelis to "refrain from unhelpful steps."

U.S. aid to the Palestinian Authority, which runs at roughly $440 million to $500 million a year, may be affected by Palestinian plans for a unity government.

The prospect of a unity government with Hamas has caused further tensions with the Israelis. Prime Minister Benjamin Netanyahu has urged Abbas to "tear up" his pact with Hamas, warning that Israel would not participate in Middle East p eace talks with a Palestinian government that is backed by the Islamist group.

Kerry is in London for a meeting with Western and Gulf allies on Syria, in which turmoil in Ukraine is also likely to be discussed.