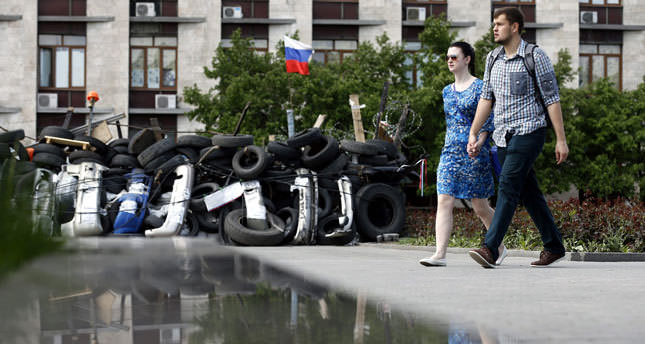 by May 16, 2014 12:00 am
DONETSK — The Ukrainian government said yesterday that its forces had made inroads in separatist-held territory in the eastern Donetsk region.

Turchynov added that the soldiers were now controlling a 5-kilometer-wide area around a television tower south of the city. He said that the tower was transmitting Ukrainian channels.

The station had earlier been controlled by separatists, who made it broadcast only Russian state TV.

Additionally, the Ukrainian Defence Ministry said that its forces destroyed a separatist hide-out in a forest near the city of Kramatorsk. It said that the soldiers suffered no losses after an intensive battle and captured three "terrorists."

Ukrainian government and media regularly refer to the separatists as terrorists. Seven people - including six members of the security forces - were killed when rebels ambushed a group of paratroopers in the area on Tuesday.

The rebels claimed Wednesday that they killed another eight soldiers, but that was never confirmed by the government. The fighting comes one day after a round table in the capital meant to help mediate the situation. However, representatives of the separatists were not at the talks. They demand that the government first withdraw its troops.

1A separatist commander, Sergei Zdrilyuk, late on Wednesday issued a 24-hour ultimatum for all government troops to withdraw and dismantle its checkpoints. "Otherwise, everything will be destroyed and burnt," Zdrilyuk told Russia's RIA Novosti state news agency
Last Update: May 16, 2014 1:10 am
RELATED TOPICS