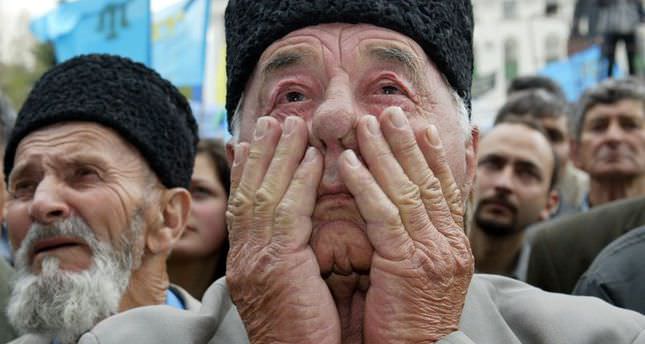 by AA
May 18, 2014 12:00 am
ANKARA - Crimean Tatars commemorate Sunday the 70th anniversary of their mass deportation under Soviet leader Josef Stalin, but feel insecure once again after Russia's annexation of Crimea in March through a controversial referendum.

Stalin had accused the Tatars of collaborating with the German occupiers and exiled them to Central Asia in 1944. They were not allowed to return until the Soviet Union collapsed in the 1990s.

Following the unification of Crimea with Russia, some have already fled the peninsula out of fear of political persecution despite official promises by Moscow to respect their rights and freedom. Many Tatars also boycotted the referendum in which 97 percent of people voted in favor of joining Russia.

"We are sorry that the Crimean Tatars have to commemorate this year's anniversary when Crimea is again occupied by force," said Ukrainian Ambassador Sergiy Korsunsky in Ankara, the Turkish capital.

"Many families are split now. Men stayed in Crimea and sent their mothers, wives and children to Ukraine, because they have to guard their homes and properties."

Crimean Tatar leader Abdulcemil Kirimoglu has been denied entry into the Crimean peninsula by Russian forces following its annexation of Crimea.

Kirimoglu has said recently that they are being "forced" to change their nationalities and "become Russian citizens," as Russians will not give them jobs if they do not become Russian citizens and he claims that Russians will further discriminate against them.
However, the ambassador assured that they, as the indigenous people of Crimea, will go back to the peninsula.

"They are the indigenous people of Crimea and this is the only nation which can define the future of Crimea," he added.

However, Korsunsky declared the referendums a "sham" and a "fiction." He added: "It is a miserable attempt to demonstrate that people in eastern Ukraine want to join Russia."

Interim President Oleksandr Turchynov described the referendums as a "propaganda farce without any legal basis" while Russia said it respects the results calling for the outcome to be implemented without any violence through dialogue between the Kiev government, and Donetsk and Lugansk.

"We are ready to talk to them (pro-Russian separatists) once they lay down their weapons and put forward a political agenda, we have made this call many times," he said.

The ambassador accused the pro-Russian separatists of being "drug addicts and alcoholics" who have seized government buildings and of "inciting violence."

"They have nothing to do with politics. They are homeless, jobless people and they are paid to fight. They drink vodka and go to fight," he said.

He also blamed Russia for provoking tension as the country is unstable now.

"That is what they want. They (Russia) want us to send our military troops in when the country is in an unstable situation ahead of the presidential elections [...] the crisis will end very soon after the elections because it is really important to legitimize the leader of the country," he added.

The Ukrainian people will go to polls on May 25 in presidential elections and the Crimean Tatars will cast their votes in the Kherson province of southern Ukraine.
Last Update: May 18, 2014 11:35 am