No sign of Russian withdrawal from Ukraine border: NATO 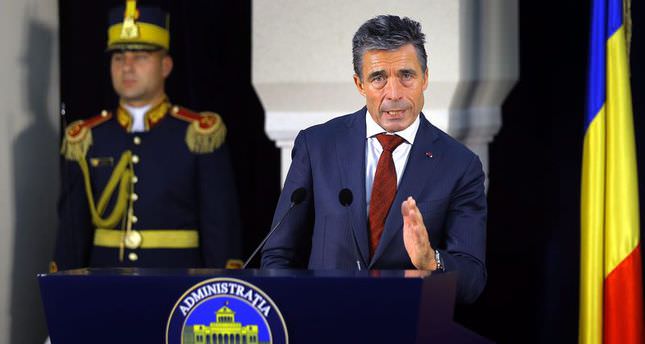 by AA May 20, 2014 12:00 am
BRUSSELS — NATO has not seen any evidence that Russia has started withdrawing troops from the Ukrainian border, despite Vladimir Putin's call for the move, the alliance's Secretary General, Anders Fogh Rasmussen, has said.

Speaking at his monthly press conference in Brussels on Monday, Rasmussen said that the Russian president's call for a pullout had been his third statement on such an action, but he added: "So far, we have not seen any withdrawal at all."

Putin ordered troops which had taken part in exercises to return to their garrisons "following completion of the spring military training programs that involved troop redeployment and exercises at test grounds in Rostov, Belgorod and Bryansk regions," the Kremlin said in a statement earlier on Monday.

Rasmussen said that if "we one day see a meaningful withdraw of Russian troops from Ukrainian border, I will be the first to welcome it, because it will be a step in the right direction".

Meanwhile, General Knud Bartels, Chairman of the NATO Military Committee and General Valeriy Gerasimov, Chief of the Russian General Staff and First Deputy Minister of Defence, held a telephone conversation on Monday during which they stressed the need to inform each other of events on a regular basis so as to avoid misunderstandings between NATO and Russia, NATO officials said.

Rasmussen said that NATO saw a completely new security situation in Europe, explaining: "It is less predictable and more dangerous. For NATO, this has implications now and for the future."

"We have already taken immediate measures, more planes in the air, more ships at sea and more exercises on the ground."

Rasmussen also said that Ukraine's 25 May presidential elections would be an important opportunity to find a peaceful way out of the current crisis.