Floodwaters roll over homes, farmland in Balkans as death toll rises to 41 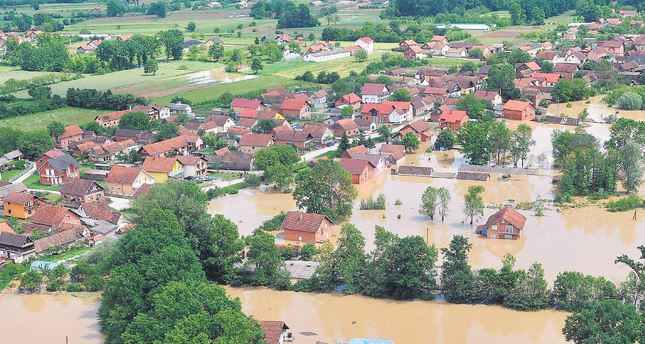 BOSNIA — Croatia reported a second death from the flooding, bringing the overall death toll to at least 41 as the river Sava submerged several villages and threatened to spill into the eastern city of Slavonski Brod. Just across the border in northern Bosnia, more than 11,000 people fled their homes in the areas of Orasje and Bijeljina as an estimated one-quarter of Bosnia's 3.8 million people have been affected by the flooding.

Three-fifths of Orasje was submerged and the town was struggling to house all of its displaced residents, Mayor Djuro Topic told the daily Dnevni Avaz. The disaster's effect on Bosnia's agriculture "will run into billions" of euros, the head of the country's farmers association, Miro Pejic, told the Fena news agency.

At least 20 people have drowned in Bosnia, and several people are missing. Another 20 people have been killed in Serbia. Hundreds of landslides have also occurred in the mountains in Bosnia, destroying homes and roads, but also potentially shifting landmines left over from the war in the 1990s that resulted from the breakup of the former Yugoslavia.

In Serbia, emergency services workers and volunteers were scrambling to enforce the embankments of the Sava as a flood crest rolled downstream. The river was expected to crest late Tuesday or Wednesday in Belgrade. Just south of the capital in Obrenovac, the authorities ordered the evacuation of several thousand people who remained in the submerged city, which sits on two rivers. It was flooded last week by the Kolubara. The floodwaters started receding Saturday, but now the Sava is rising, and authorities fear another wave of high water.

Obrenovac has suffered the worst of the flooding; 13 of Serbia's flood victims drowned there. After the latest round of evacuations overnight, about one-third of its 30,000 inhabitants were moved to safety by authorities while many others left on their own. It was unclear how many people remained in the city. Police have cordoned it off and are not allowing entry.

In Belgrade, the Sava's embankments were being reinforced in anticipation of the crest. The longest river of the former Yugoslavia converges with the Danube at Belgrade. Authorities are concerned that when the crest reaches the much larger and already swollen Danube, the floodwaters could rebound and rise higher upstream.

Meanwhile, rescue teams, donations, helicopters and boats are being sent from many countries including Turkey to help Bosnia and Herzegovina and Serbia. Turkey's Prime Ministry Disaster and Emergency Management Presidency (AFAD), which is responsible for the coordination of Turkey's aid deliveries to victims, has sent a 41-person rescue team with a C-130 cargo aircraft for search-and-rescue operations as well as much-needed supplies and equipment such as 100,000 sandbags, blankets and generators.

Turkey's Cooperation and Coordination Agency and the Turkish Red Crescent have also sent personnel to aid the flood-hit countries.
At least 41 people have died since last Wednesday after heavy rainfall in Bosnia and Serbia causing the worst flooding in 120 years. More than 1 million people in Bosnia have no access to clean water, over 100,000 buildings have been destroyed, and rebuilding is expected to cost billions.

Rescue aid has also been delivered from countries like Bulgaria, Greece, Holland and Norway. Greece has sent an eight-person rescue team to Serbia and Bosnia and has said it is ready to send another 25 people if needed. "We need to help one another," Bulgarian Deputy Prime Minister Daniela Bobeva stressed.

Bosnians living in Holland have gathered donations to accompany rescue teams like medical supplies, blankets, and food supplies for the flood victims. Norway's Foreign Minister Borge Brende stated that the Norwegian government will send $7.5 million in aid to both support emergency needs and to help the flooded region in rebuilding the infrastructure.

The worst and deadliest floods in the Balkans since rainfall measurements began 120 years ago came after several months' worth of rain fell in only a few days. The death toll, reported by Anadolu Agency teams in the region, has risen to 41, while tens of thousands of evacuees in Bosnia and Herzegovina and Serbia call for international assistance.
RELATED TOPICS