Deputy PM: Compensation to be given to Soma families 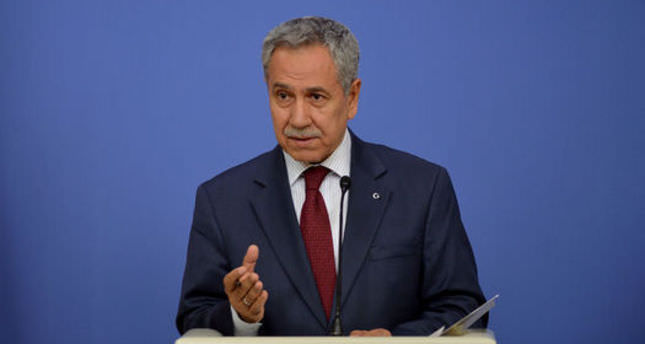 by AA May 22, 2014 12:00 am
ANKARA — Turkey's Deputy Prime Minister and Government Spokesperson Bülent Arınç on Wednesday requested that people "let the justice system determine responsibility for the Soma coal mine disaster and let's not create confusion."

"The Soma coal mine disaster took place despite all preventive regulations being in place, a thorough investigation will be conducted to find out the reasons for the incident and we will have to devise more measures," Arınç continued.

The deputy prime minister ruled out restarting operations in the mine on Wednesday, saying, "The production should not continue under these circumstances...If security is inadequate despite all the precautions, then we should consider closing [the mine]."

Workers were seen on Sunday putting up brick walls in front of two entrances into the mine, with one of them decorated with an
overhead sign that said "Work Safety First."

The disaster, which resulted in the deaths of 301 people, was the deadliest mining incident in Turkey's history, surpassing the death toll of a firedamp explosion that killed 263 miners in Zonguldak in 1992.

Dozens of prosecutors have been assigned to oversee post-mortem examinations. Eight people, including the chief executive of the company that runs the mine, have been arrested amid an ongoing investigation.

Minister Arınç was asked about the allegations that Prime Minister Recep Tayyip Erdoğan slapped a protestor inside a shop in Soma. Arınç plainly rejected the claims.

"Mr. Prime Minister did not punch anybody. The person who claims to be punched has changed his testimony four times. How can you imagine a prime minister who punches people?"

Arinc added that "families of the victims of the Soma coal mine disaster will be taken care of by the state to lighten their grief and regulations will be made to guarantee the future of their children for life," added to what Turkey's Labor minister had previously said.

Earlier in the day Labor Minister Faruk Çelik discussing the cause of the incident said that it started because of "heated coal on the ceiling".

Çelik added that he is waiting for the report on the incident to see if there was any wrongdoing on the part of the government when questioned about a possible resignation from himself or the Energy Minister Taner Yıldız.

The labor minister went on to say that "we have shut down 162 coal mines and handed out 308 administrative fines worth US$520,000 in the last three-and-a-half years," as he was questioned about a possible lack of auditing at the coal mine in Soma.
Shutting down the coal mines was also not the answer Çelik said. This is because Turkey requires 120 million tons of coal per year of which 80 million tons is domestic product.

Turkey's labor minister earlier said inspections that were carried out at the mine in the town of Soma in western Turkey are to be investigated during his speech in the parliament; he also stated that the mine had been inspected eight times after complaints were lodged.