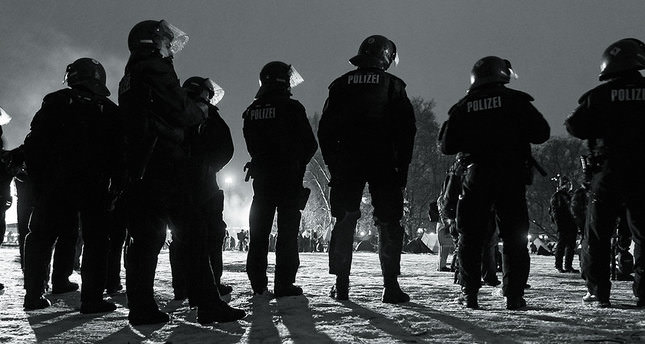 by AA May 23, 2014 12:00 am
BERLIN — German police say they have taken all possible measures to ensure a safe visit for Turkish Prime Minister Recep Tayyip Erdoğan, who is likely to face several protests in Cologne.

Nine demonstrations have been registered across the city during Erdoğan's visit - three of them protest rallies, Cologne police department spokesman Carlo Kreitz told the Anadolu Agency on Thursday.

He said: "There is no sign of tension for now. However, we cannot tell whether there will not be any tension."

"The European Federation of Alevi Communities is organizing the most large-scale rally of the day. Also, the extreme-right groups PRO, NRW and PRO Cologne will be holding demonstrations in Cologne."

Erdoğan is set to attend the 10th anniversary of the Union of European Turkish Democrats - one of the most influential organizations of Turkish immigrants in Germany - in the Lanxess Arena Congress Center on Saturday, where he will address Turkish people living in Germany.

Nearly 6,000 policemen will be deployed in the city on Saturday, according to the German press.

Stephan Mayer, an MP of German coalition partner Christian Social Union, on the other hand has said that police and demonstrators could face "serious danger".

Thousands of Turkish immigrants are eagerly awaiting Erdoğan's visit and his address, while several politicians, parties and groups have called for them to be cancelled, saying that could lead to new divisions and tensions among immigrants in Germany.

Several NGO's and political groups had announced they have registered counter-demonstrations with the authorities.

The European Federation of Alevi Communities, which has long been critical of the Erdoğan government's policies, has announced a mass rally in Cologne's Ebertplatz, only three kilometers away from the Lanxess Arena.

The anti-immigrant PRO NRW party also had announced a protest would be carried out at the Deutz Train Station, about 800 meters away from the Lanxess Arena.

Turks are the largest immigrant group in Germany with a population close to three million. Around a million of them have acquired German citizenship.

Prime Minister Erdoğan addressed thousands of Turkish immigrants in major rallies organized in Cologne in 2008, in Düsseldorf in 2011 and in Berlin three months ago.

At the events, he criticized Germany for deploying discriminatory policies against Turkish immigrants and called on Turks to learn German and integrate into German society, but also to preserve their own language and culture.

Several German politicians criticized Erdoğan's remarks and approach, claiming they reinforced a continued focus among Turkish immigrants to politics in Turkey, rather than Germany, and undermined integration efforts.

"I am for integration, but against assimilation," Erdoğan stressed during his visit to Berlin in February. "I believe that assimilation is a crime against humanity."

Erdoğan's visit on Saturday comes only a day before the European Parliament elections take place in Germany.

Germany's anti-immigrant, populist parties and some conservative politicians have tried to attract the attention of the electorate by strongly criticizing Erdoğan and campaigning for his visit to be cancelled.

German Foreign Minister Frank-Walter Steinmeier told a press conference on Monday that he disagreed with calls for the visit to be cancelled.

Steinmeier said: "Prime Minister Erdoğan planned this visit months and weeks ago. I am confident that this will be in line with internationally established practices and a good climate in Germany-Turkey relations.

"We should not fall into a debate on preventing this or that politician visiting Germany and addressing citizens. This would also be inappropriate to the level we have reached in Germany-Turkey relations."