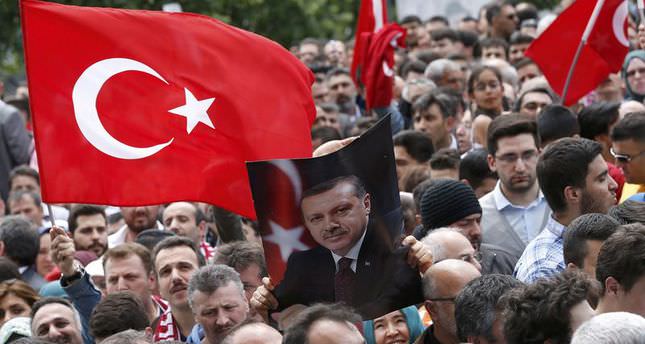 COLOGNE — Thousands of Turks from different German states are prepared to welcome Turkey's Prime Minister Recep Tayyip Erdoğan in the German city of Cologne. Ahead of Erdoğan's visit, German police informed that they have taken all possible measures to ensure a safe visit for Turkish Prime Minister Recep Tayyip Erdoğan, who is likely to face several protests in Cologne.

Erdoğan to arrive later on Saturday to attend the 10th founding anniversary of the Union of European Turkish Democrats.

Citizens are waving Turkish, Palestinian and Azerbaijani flags, and chanting "Recep Tayyip Erdoğan", "Stand upright, don't bow," and "Expatriates are with you."

A huge crowd of people are waiting to enter the Lanxess Arena where Erdoğan is expected to speak, going through security checks as they come in.

Security concerns have arisen after the local government of Cologne granted permission for eight protests against Erdoğan in the vicinity of the arena. Erdoğan had addressed 20,000 Turkish citizens at Cologne Arena eight years ago and he made another speech in Berlin recently.

On Wednesday, German government spokesperson Steffen Seibert said Germany was not concerned over the Turkish Prime Minister's visit and address to his supporters in Cologne.

The visit sparked debates as several politicians and groups are calling for Erdoğan's speeches to be canceled citing fears that they might lead to new divisions and tensions among immigrants in Germany.

On Thursday, German Chancellor Angela Merkel called on Erdoğan to act with "a sense of responsibility and sensitivity."

Prime Minister Erdoğan addressed thousands of Turkish immigrants in major rallies organized in Cologne in 2008, in Düsseldorf in 2011 and in Berlin three months ago.

At the events, he criticized Germany for deploying discriminatory policies against Turkish immigrants and called on Turks to learn German and integrate into German society, but also to preserve their own language and culture.

Several German politicians criticized Erdoğan's remarks and approach, claiming they reinforced a continued focus among Turkish immigrants to politics in Turkey, rather than Germany, and undermined integration efforts.

"I am for integration, but against assimilation," Erdoğan stressed during his visit to Berlin in February. "I believe that assimilation is a crime against humanity."

Erdoğan's visit on Saturday comes only a day before the European Parliament elections take place in Germany.