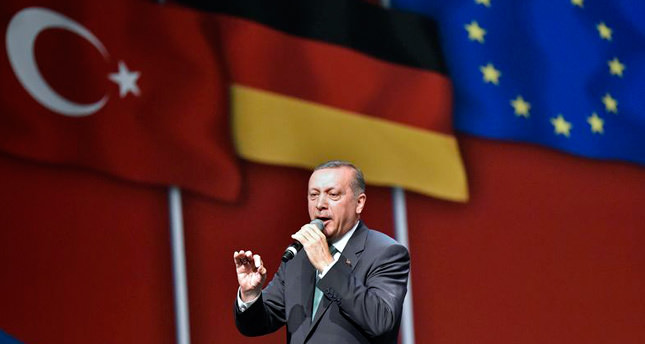 by Daily Sabah May 25, 2014 12:00 am
COLOGNE — Prime Minister Recep Tayyip Erdoğan gave a message to Europe from the city of Cologne, Germany. "There is now a new Turkey, not the one you have known previously. EU should face and embrace the new Turkey" he said.

"With its large economy and active foreign policy, Turkey is ready to shape the 21st century, thus, everyone should now accept this reality. No one, no country, no international community can arrogantly wave their finger at Turkey and chart out our route. No one has the right to scold Turkey. No one can withold the rights they enjoy themselves, from Turkey

"Which European country tolerates so called 'protestors' who vandalise the city and shoot at police officers? " asked Prime Minister Erdoğan referrering to critics on using 'force' to protesters. "Those that plan to target Turkey using me as an excuse, will find our strong and dignified nation standing tall before them" Erdoğan said. I wonder how these European countries would tolerate the vandalism and riots in their cities.

Who can recklessly call me a dictator while we have advanced Turkey with reforms, democratic rights and freedoms standards. Germany most probably, seldomly faces degrading headlines such as"Go to hell "Erdogan". However, in Turkey dozens of unethical and demeaning newspaper headlines are published, yet,they claim that media is under pressure in Turkey.


Erdoğan reminded that Turks are a part of Europe with their existence exceeding 5 million citizens in boundaries of the European Union. "Democracy, justice and freedom are our rights too", we have the right to voice our opinions over regional and global issues, said Erdoğan.