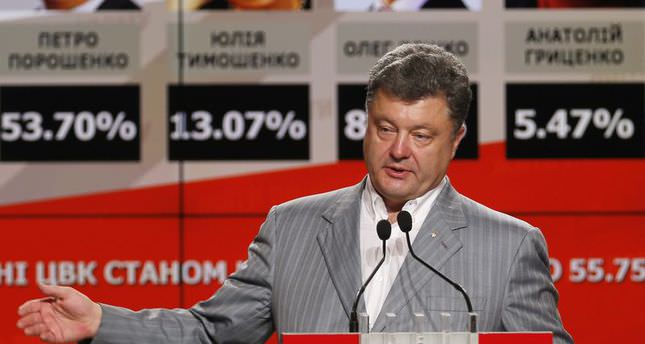 by May 26, 2014 12:00 am
KIEV — Ukraine's next president pledged on Monday to restore control over the separatist east with a more effective military operation, and said he would meet Russian officials in a matter of weeks to secure their help in resolving the crisis.

Moscow said it was ready for dialogue with Petro Poroshenko but he should scale back his armed forces' campaign in the east, where pro-Moscow gunmen have declared independence in two provinces.

Ukrainians rallied overwhelmingly in Sunday's election behind Poroshenko, a billionaire owner of chocolate factories and political veteran, hoping the burly 48-year-old can rescue the nation from the brink of bankruptcy, civil war and dismemberment by their former Soviet masters in the Kremlin.

Preliminary results with about half of votes counted gave Poroshenko 53.7 percent of the vote - towering over a field of 21 candidates with enough to avert a run-off. His closest challenger, former premier Yulia Tymoshenko, secured just 13.1 percent and made clear she would concede.

In a news conference on Monday, Poroshenko made clear his most urgent task is finding a modus vivendi with the giant neighbor that has seemed poised to carve Ukraine up since a pro-Russian president was ousted in a popular revolt in February.