EU Parliamentary elections signal shift toward the far-right in Europe 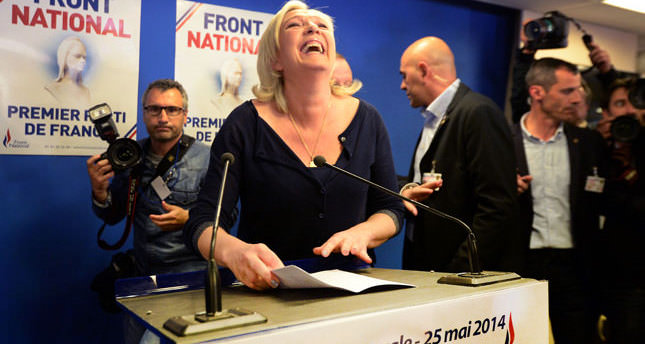 Preliminary results from the European Parliament elections show a clear shift toward Eurosceptic and right-wing parties across the continent. In France Marine Le Pen's Front National received a quarter of the votes and secured 24 of France's 74 seats in the EU parliament

ISTANBUL — EU parliamentary polls were shaken on Sunday by an increasing share of right-wing parties winning seats, challenging major European political parties with both center-right and left political perspectives including the European People's Party (EPP), Progressive Alliance of Socialists and Democrats and Alliance of Liberals and Democrats for Europe Group. Projections show that the center-right umbrella group EPP, which has held 275 seats in the parliament since the 2009 election, looks to have lost 61 seats. The socialists, the second major party in the parliament, are also be expected to hold 186 seats, down from 196. With Eurosceptic parties presumably set to win some 140 seats in the 751-seat assembly after the four days of polling across the 28-nation bloc, voters' mounting frustration with the EU could lead to EU policies changing in order to address the anti-EU mood across Europe. As anti-EU and anti-immigrant parties have been on the rise, how this change would possibly affect the future of the European community remains a critical question. 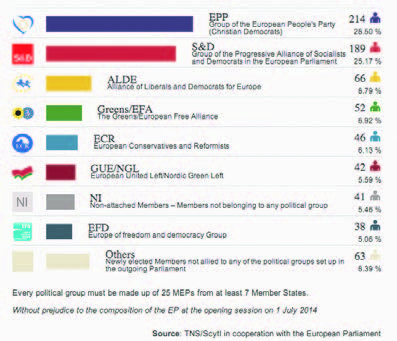 According to exit polls, the shares of far-right and euro-skeptic parties have increased in France, the U.K., Denmark and Austria to a greater extent. Quasidefinitive results at the time of Daily Sabah's publishing show that the anti-immigration, anti-EU France's far-right party Front National led by Marine Le Pen has received 25 percent of the vote and secured 24 of France's 74 seats on the EU parliament.

The anti-EU U.K. Independence Party has declared that they secured over 27 percent of the vote with results reported in 10 of the 12 British regions. In Denmark, the anti-EU Danish People's Party emerged victorious, while far-right groups in Hungary and Greece followed the same pattern with both increasing shares in the election results. In Austria the rightwing Freedom Party also had a strong showing in the election, coming in third with 20 percent of the vote.

As the far-right parties have had a big gain across Europe, the low turnout for Sunday's election proved that Europeans did not show much interest in the polls despite a miniscule improvement to 43.09 percent. Historically, the turnout for European elections has been relatively low with the lowest turnout, 43 percent in 2009. This increase in the turnout has received positive reviews from many europhiles.

The overall results indicate that Europeans' interest in the EU has been decreasing due to unsuccessful policies applied by Brussels. As many Europeans did not even want to go the polls, those who did vote cut their support for the mainstream and chose to vote for fringe parties with anti-EU and anti-immigrant stances.

Increasing disenchantment among Europeans with EU policies toward the common currency, the debt crisis, recession and austerity since the 2009 parliament election has led many Europeans to hold anti-EU positions, reflecting voter turnout. Can Baydarol, an expert on the EU, spoke of the danger of rising xenophobia among Europeans as the election results indicate. "There is considerable potential that the austerity measures [and] euro crisis within the EU, especially in Germany, led to rising unemployment and a change in living standards, thereby inciting xenophobia within European countries. The election is a result of this situation," said Baydarol.

This situation demonstrates that many migrant communities living in the EU have been under potential threat due to the rising negative attitudes among Europeans toward migrants. This begs the question of how an anti-EU mood would affect the integration model, security policy on immigration and how likely European society would remain open to the migrant communities. Others warn that continuous tough talk on immigration might lead to an increase in social tension among migrant communities in the near future, sparking fears of a repeat of widespread urban violence and civil unrest as in France in 2005. Time will tell to what extent the new EU will be able to challenge those problems.
Last Update: May 27, 2014 2:31 am
RELATED TOPICS