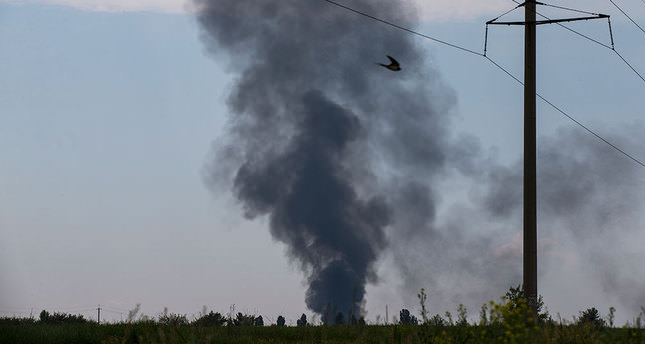 by Associated Press May 29, 2014 12:00 am
SLOVYANSK, Ukraine — Rebels in eastern Ukraine shot down a government military helicopter Thursday amid heavy fighting around the eastern city of Slovyansk, killing 14 soldiers including a general, Ukraine's leader said.

Acting President Oleksandr Turchynov told the parliament in Kiev that rebels used a portable air defense missile Thursday to down the helicopter and said Gen. Volodymyr Kulchitsky was among the dead.

Slovyansk has become the epicenter of fighting between pro-Russia insurgents and government forces in recent weeks. Located 100 miles (160 kilometers) from the Russian border, it has seen constant clashes and its residential areas have regularly come under mortar shelling from government forces, causing civilian casualties and prompting some residents to flee.

An Associated Press reporter saw the helicopter's go down and the trail of black smoke it left before crashing. Gunshots were heard around Slovyansk near the crash site and a Ukrainian air force jet was seen circling above. It was too dangerous to visit the site itself.

The city of 120,000 is in the Donetsk region, one of the two sprawling provinces in eastern Ukraine that have declared independence from the government in Kiev.

The Kiev government condemns the insurgency roiling the east as the work of "terrorists" bent on destroying the country and blames Russia for fomenting it. Russia denies the accusations, saying it has no influence over rebels, who insist they are only protecting the interests of Russian-speakers in the east.

Still, fighters from Russia, including from the battled-hardened region of Chechnya, have been appearing recently in the ranks of the separatists.

Also Thursday, an insurgent leader confirmed that his fighters were holding four missing observers from the Organization for Security and Cooperation in Europe and promised that they would be released shortly. Vyacheslav Ponomarev, the self-proclaimed "people's mayor" of Slovyansk, told the AP that the monitors who are from Turkey, Switzerland, EstoniaÂ and Denmark were safe.

"I addressed the OSCE mission to warn them that their people should not over the coming week travel in areas under our control. And they decided to show up anyway," Ponomarev said.

"We will deal with this and then release them," he said, without setting a specific timeframe.

The OSCE had lost contact with the team in Donetsk on Monday evening. Their teams have been deployed to Ukraine to monitor security situation following Russia's annexation of Crimea and the rise of the pro-Russia separatist insurgency in eastern Ukraine. They also observed Sunday's presidential vote, won by billionaire candy magnate Petro Poroshenko.

Poroshenko has promised to negotiate with people in the east but also vowed to uproot the armed rebels.

In the most ferocious battle yet, rebels in Donetsk tried to take control of its airport Monday but were repelled by Ukrainian forces using combat jets and helicopter gunships. Dozens of men were killed some insurgent leaders said up to 100 fighters may have been killed.

The mood in Donetsk was calm Thursday, although many businesses have stopped opening due to fears of renewed fighting.Â

The separatists in Ukraine have pleaded to join Russia, but President Vladimir Putin has ignored their appeal in an apparent bid to de-escalate tensions with the West and avoid a new round of Western sanctions.

Putin has supported an OSCE peace plan that calls for ending hostilities and launching a political dialogue and has said Russia would work with new leader Poroshenko. But Russia has repeatedly urged the Ukrainian government to end its military operation against the separatists.

Russian Foreign Minister Sergey Lavrov on Thursday called for quick international mediation to persuade Kiev to halt what he described as a "punitive operation" in the east.