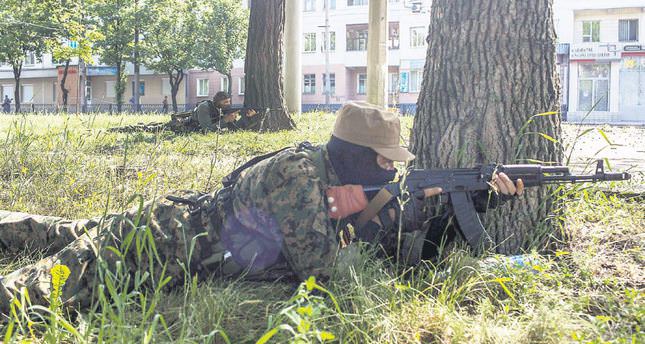 by Anadolu Agency May 29, 2014 12:00 am
DONETSK — Ukrainian president-elect Petro Poroshenko vowed to crush the pro-Russian rebellion in the east of the country. "We will end this terror," Poroshenko told the German tabloid Bild in an interview published yesterday. "There is a real war being waged against our country."

The Ukrainian stressed that he was not giving any orders because he has not been inaugurated but said he is in close contact with the government. "I can tell you that the operation has at last really begun," he said. The situation escalated Monday when at least 36 people were killed and 31 injured after government forces retook the airport of Donetsk from pro-Russian fighters.

It was the first time that fighting took place in the east Ukrainian city of 1 million inhabitants.Ukraine said Tuesday it had recaptured the airport in the eastern city of Donetsk after deadly battles with pro-Moscow rebels, while EU leaders urged Russia to work with the country's new president. Caught up in the drama in Donetsk were a team of international monitors with the OSCE who have gone missing after being detained at a checkpoint.

As fear gripped the city's streets, Russian President Vladimir Putin called on Ukraine to end its "punitive" operation in the rebelheld east and for talks between Kiev and the insurgents.

EU leaders, at a Brussels summit, urged Russia to work with Poroshenko and to continue withdrawing its troops from the country's border. Russia should also use its leverage on the armed separatists to de-escalate the situation" in the east, said a draft EU summit statement seen by AFP. The EU has applied visa bans and asset freezes to a series of high-profile Russian and Ukrainian figures judged to have helped in Moscow's annexation of Crimea or stoked separatist violence in eastern Ukraine.

Poroshenko said Monday the military would press its offensive against the insurgents who now control about a dozen cities and towns in the east. At the same time, the 48-year-old pro-Western chocolate tycoon said he was ready to engage with Russian leadership and was optimistic a meeting with President Vladimir Putin could be arranged soon. But Russian Foreign Minister Sergei Lavrov said a visit by Poroshenko was "not being considered."

The EU leaders also pressed on Poroshenko the need to make all efforts on his side to ease the conflict and to continue to adopt economic and political reforms to bring Ukraine up to European standards.

U.S. President Barack Obama called the president-elect and offered him "the full support of the United States" but U.N. Secretary General Ban Ki-moon urged Ukraine to use "exclusively peaceful means" to regain control in the east.

Donetsk mayor Oleksandr Lukyanchenko said two civilians and 38 combatants had died and another 31 were wounded in the fighting, including Russians and possibly Chechens.

An AFP correspondent reported seeing body parts and blood splattered near a bullet- riddled truck on the airport road, where makeshift blockades had been set up with dumper trucks and piles of tires.

Combat jets and helicopter gunships struck the airport terminal Monday after it was seized by scores of gunmen just a day after Ukraine's presidential election won by Poroshenko.

The Organization for Security and Cooperation in Europe (OSCE), which has played a key role in trying to end the crisis, said it had lost contact since Monday with four monitors - a Dane, an Estonian, a Swiss and a Turk - while on patrol in Donetsk.

An official in Vienna said they had been held at a checkpoint before contact was lost, while a Turkish foreign ministry official said: "We have learnt through unofficial channels they are safe and sound."

The OSCE also announced that two Ukrainian journalists accused of "spying" were taken hostage by separatists in the Luhansk district.
Speaking in Brussels, French President Francois Hollande said he would hold "face to face" talks with Putin in France on June 6, with the Ukraine crisis high on the agenda.

Hollande said he believed Putin would "now recognize" Ukraine's new president and "ensure there is a de-escalation" in Ukraine.
Meanwhile, Chechnya's regional leader said that he hasn't sent any troops to fight alongside pro-Russia insurgents in eastern Ukraine, but he says some Chechens may have gone there on their own.

In a statement posted Wednesday on his Instagram, Ramzan Kadyrov said twothirds of three million Chechens live outside the province in Russia's North Caucasus mountains, so he "can't and mustn't know where each of them goes."
RELATED TOPICS