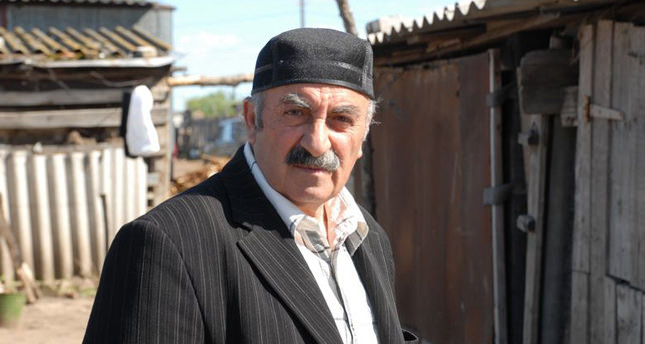 Amid fierce fighting between the rebels and Ukraine’s army in Slovyansk, Turkish minorities living in eastern Ukraine are forced to abandon their homes due to growing security concerns in the region.

DONETSK — Many Ahiska Turks, a Turkish-speaking minority living in Ukraine's eastern region, have been forced into internal displacement in Ukraine as the fight between pro-Russian rebel groups and Kiev forces has frequently escalated over this last week.

Around 700 Ahiska Turks are believed to have moved to different regions of the country as many Ahiska family houses have been destroyed amid Ukrainian military operations to expunge pro-Russia forces from the city of Slovyansk.

Nebican Basatov, Ahiska Turks community representative, told AA that during heavy clashes in May 26, two Ahiska families living in the town of Semenevka in Slavyansk have ended up being homeless.

It was reported that one more Ahiska family residing in the town of Çervoniy Malaçar were unable to guard their home, and were forced to leave their homeland. Basatov also states the significance of Ahiska Turks' situation living in that region, adding that "many of those Ahiska Turks have already moved to places such as Herson, Rostov in Russia and Azerbaijan" in order to save their lives. However, due to financial difficulties, many Ahiska Turks have not been able to move to more secure places, thus many have started living in basement of their houses.

Basatov also said that the escalating clashes would not come to an end in the near future putting many displaced minorities in trouble.

"Those who fled to more secure regions can possibly return to Slovyansk within one or two months, putting many lives in jepoardy," said Basatov while demanding protection from Turkey.

In the first week of May, the Turkish ethnic community has raised its voice to receive some protection from the ongoing political crisis in the two regions of eastern Ukraine which Kiev forces could not take under control, while both sides put pressure on Ahiska Turks to take sides during the violent clashes.

Dr. Vügar İmanbeyli, professor at Istanbul Şehir University, spoke to Daily Sabah, and commented on the situation of Ahiska Turks living in Slovyansk.

"Just like the problems faced by the Crimean Tatar community, who have become internally displaced in other areas of Ukraine due to numerous difficulties arising from less than two month Moscow rule, Ahiska Turks moving to other areas has also lead to many problems.

"Without stability in the region, many other ethnic communities living in those regions will also be heavily affected by the ongoing clashes," said İmanbeyli.

As Ahiska Turks have a low representation level over the region, this makes Turkish ethnic community more insecure and vulnerable than ever.

The fighting has become more frequent over this week. A Russian journalist, Arkady Babchenko reported from Donetsk region for BBC that the clashes "broke out even during the day time. Previously, it happened only at night."

The latest developments show that violent clashes have been escalating unceasingly. The brutal fighting was reported Thursday across parts of eastern Ukraine. In addition, a Ukrainian military helicopter was shot down by rebels, killing 14 people including one general. This proves that the heavy loss of life was considered as a major blow to the Ukrainian forces. The rebels in Donetsk tried to seize the airport there on Monday but were repelled by Ukrainian forces using combat jets and helicopter gunships, leaving 100 fighters dead, according to some insurgent leaders. On Wednesday, rebels attacked a military base in the city of Luhansk and gunfire was reported in Donetsk where separatist groups seized control of strategic areas, government buildings and military bases.

As the clashes have been escalating, President-elect Petro Poroshenko promised to punish pro-Russian rebels who downed an army helicopter in the east of the country, thus bringing stability back in the country. PM Yatsanuk has also called on Russia to stop meddling in the situation in order to defuse the heavy clashes, stating "We ask Russia and Putin to block the border to Ukraine. If Russia is out of this game we can handle this situation in a week."

Russian President Vladimir Putin has long rejected Russian links to the separatist drive. However, according to the latest reports, the leaders of the self-proclaimed Donetsk People's Republic admitted that the separatist army has many foreigners, including some from the Russian province of Chechnya. Ukraine interim President Oleksandr Turchynov told parliament on Thursday that he "received information that near Slavyansk, the terrorists [used] a Russian man-portable air defense system [to] shoot down our helicopter." In addition, a separatist leader had earlier told AFP that among those killed in the seizure of Donetsk's international airport on Monday were 33 Russian nationals. This would prove that many rebels do not represent the true will of the residents living in Donetsk and Lugansk regions in eastern Ukraine.

Dr. Vügar İmanbeyli states that many Ukrainians living in eastern Ukraine do not give their support to pro-Russian militants. However, Moscow has long considered the insurgency as an indicator of the rise of far-right in Ukraine while giving full support for pro-Russian rebel groups.

Considering the intensified clashes, the U.S State Department spokesperson Jen Psaki said that in a phone conversation, U.S. Secretary of State John Kerry raised concerns with Russian Foreign Minister Sergei Lavrov over Russians' support to the separatist drive as to putting an end its support and urging them to lay down their arm. The international community has been calling for national dialogue to bring the stability and to stop the ongoing violence between rebels and Kiev's army. Enes Bayraklı, a foreign affairs specialist points out the importance of forming a national dialogue between two parties to resolve the Ukraine crisis, adding that "Russia or the West's intervention to the ongoing crisis would not do any good to Ukraine."