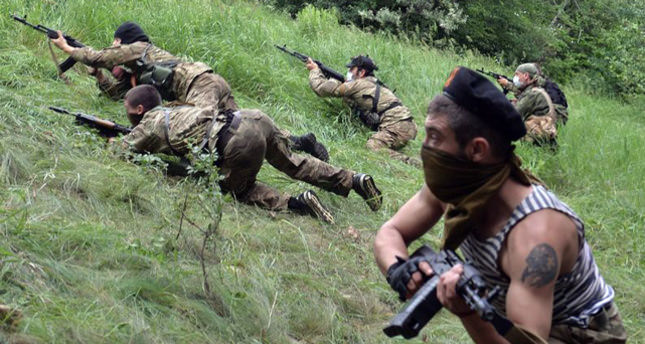 by Jun 02, 2014 12:00 am
KIEV — A fierce battle was underway on Monday in Ukraine's rebellious east after a pro-Russian militia attacked a Ukrainian border post with automatic weapons and grenade launchers in the early hours.

Security sources said a force of separatists had occupied the upper floors of a nearby apartment block and were shooting into the border post on the southern edge of Luhansk, a city very close to the frontier with Russia.

"Shooting is continuing. There has been no let-up in firing for seven hours now," border post spokesman Oleh Slobodin said.

"We have 8 or 9 wounded. The attackers have five dead and 8 wounded," he said.

Ukraine's eastern region has been riven with separatist armed rebellion for the past two months which the Kiev government says is fomented by Russia. It says armed fighters from Russia and the Caucasus region are fighting alongside rebels who are fighting rule from Kiev.

Another statement from the Ukrainian border service said the separatists at the Luhansk border post were sniping from private apartments and had stopped people leaving the residential block they had occupied, making it difficult for the border guard forces to return fire.

The Ukrainian army is taking part in an "anti-terrorist" operation to try to crush the rebellions in the east. Border guards said on Monday that the army had not yet reinforced to help them fend off the attack in Luhansk.