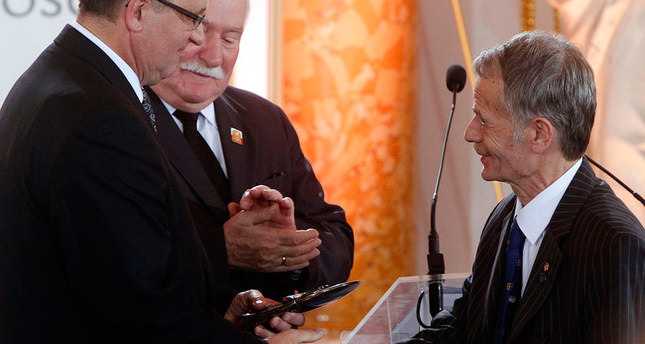 by AA Jun 04, 2014 12:00 am
WARSAW — Poland has honored Crimean Tatar leader Mustafa Kırımoğlu (Dzhemilev) with a new democracy award dedicated to the promotion of freedom and democracy across the world.

In his speech on receiving the prize, Kırımoğlu said the award represented an emotional support to Crimean Tatars' bid to get their rights and to return to their homeland.

"Our nation, our Ukrainian state is under great danger. Our lands have been occupied by a country which pledged in 1994's Budapest Memorandum to be a guarantor of Ukraine's territorial integrity. (...) We hope that, with the support of democratic forces, we will save our homeland from occupation and continue to live together," he said.

Mustafa Dzhemilev, also known with his adopted surname Kırımoğlu -- son of Crimea, -- is the former chairman of the Crimean Tatars' national assembly and a current Ukrainian MP.

The Crimean Tatars -- who experienced mass deportation to Central Asia in 1944 under Stalin's Soviet government -- pride themselves on having waged a successful campaign of passive resistance to Soviet authorities under the leadership of Kırımoğlu.

Crimean Tatars are the native population of Crimea since the Mongol hordes' invasion in the 13th century.