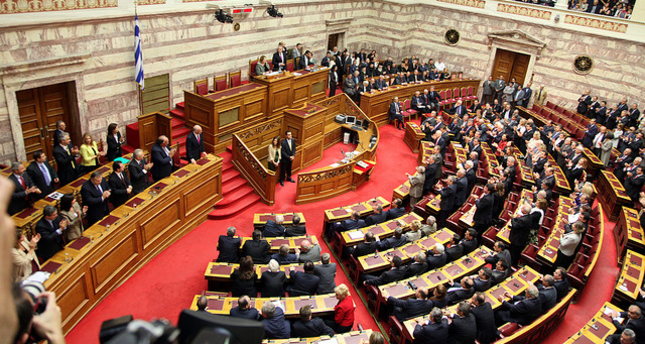 by Stelyo Berberakis Jun 06, 2014 12:00 am
ATHENS — The Greek parliament has voted in favor of lifting three Golden Dawn deputies' immunity who were arrested on charges of founding and operating a criminal organization. Golden Dawn party leader Nikos Mihaloliakos and the second leaders Hristos Pappas and Yannis Lagos were brought to the parliament from prison to make their case. Of the 224 lawmakers present, all but one voted in favor of lifting their immunity. The three jailed golden dawn deputies, together with the others, shouted at those who voted against them. The Golden Dawn leader and jailed deputies were held responsible for gunning down a left-wing affiliated party member last year in a drive-by shooting. Greece's chief public prosecutor called for the deputies to stand trial. Having been jailed for the last eight months, the public hearing is be expected to be held in the upcoming months. Despite many lawsuits against the neo-Nazi Golden Dawn party, it took third place in the last general election, increasing its share of the vote to 8 percent when it entered parliament for the first time, sparking anxiety on the political stage.
RELATED TOPICS