Clashes break out in Sloviansk 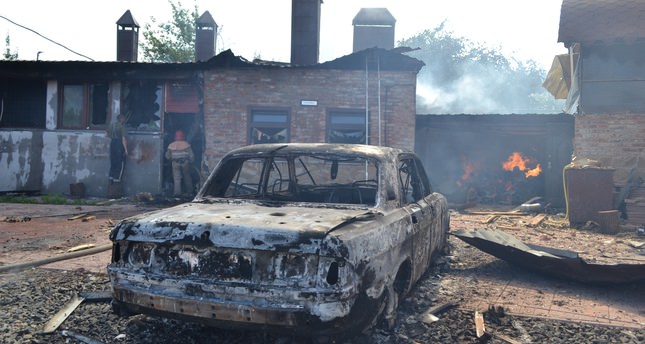 Loud booms and shelling were heard in downtown Slovyansk, where at least five buildings bore damage from shelling a day earlier. The city has been an epicenter of a nearly two-month standoff between Ukrainian forces and pro-Russian rebels, who have seized administrative buildings, police stations and border posts across the region.


The clashes come a day after President Petro Poroshenko announced that negotiations had started in Kiev between Ukraine, Russia, and the Organization for Security and Cooperation in Europe.


Poroshenko said the meeting focused on strengthening the porous Ukraine-Russia border, and said Ukraine "must cease fire by the end of this week." While he promised the negotiators would meet daily until the crisis was resolved, he did not say whether results had been achieved on Sunday.


The OSCE, whose rotating presidency is currently held by Switzerland, said Heidi Tagliavini, a Swiss diplomat who has worked on crises in places like Chechnya and Georgia, was its representative in the negotiations. Poroshenko's office said Russia's ambassador to Ukraine and the Ukrainian ambassador to Germany also took part.


Russia has repeatedly called for Ukraine to end its operation in the east, while Ukraine has blamed Russia of fomenting tensions in the region and backing the rebels materially.


Fighting was continuing at about noon Monday in Sloviansk, where residents said buildings had been hit by mortars a day earlier. A bus with a sign in the windshield reading "children" left the city on Monday.


Rebels have held the Ukrainian government responsible for the rising number of civilian casualties in the conflict, while the Kiev leadership says the insurgents have attacked civilians in order to foment resentment against the government.

The spokesman for Ukraine's operation in the east, Vladislav Seleznev, wrote on Facebook late Sunday that the separatists were responsible for the shelling in Sloviansk.