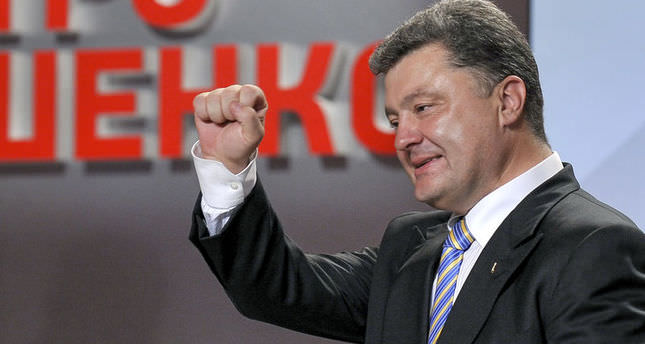 by AA Jun 10, 2014 12:00 am
KIEV — Ukraine's newly sworn-in President Petro Poroshenko and Russian and European officials have discussed proposals to end the conflict in eastern Ukraine.

The billionaire confectionary oligarch took part in a three-member "working group discussion" on a proposed peace plan with Mikhail Zurabov, Russia's ambassador to Ukraine, and a representative of the Organisation for Security and Co-operation in Europe, in Kiev on Sunday.

Poroshenko said during the meeting that people were dying every day as a result of the clashes in eastern Ukraine, according to a statement by the Ukrainian Presidency.

Poroshenko said: ''Ukraine is paying a very high price; this is unacceptable."

"'The Ukrainian government must firstly provide security over its borders.''

Poroshenko, who was sworn in as Ukraine's fifth president on Saturday, said he would solve the instability in Ukraine by peaceful means and peaceful pro-Russian separatists would be forgiven.

Gas deliveries to Ukraine could be cut by 11 June if an agreement is not reached, according to Ukrainian local media.