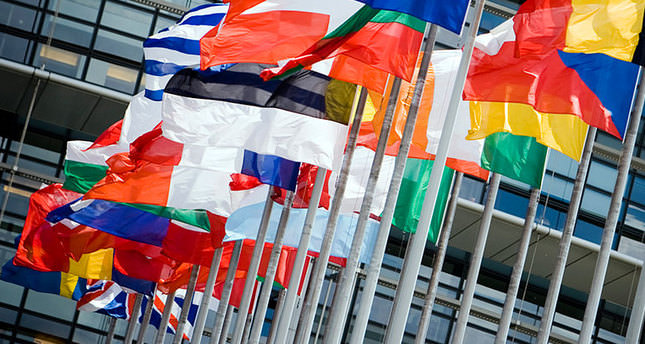 by AA Jun 13, 2014 12:00 am
The kidnapping of Turkish consulate staff in the northern Iraqi city of Mosul by militants of Islamic State of Iraq and the Levant -- or ISIL -- has drawn worldwide condemnation.

The international community, including officials from the U.N, the EU, the U.S. denounced the abduction and called for the release of those kidnapped.

The ISIL raided Turkey's Mosul consulate on Wednesday and abducted 49 Turkish nationals, including the consulate's staff and their families, after they assumed control of the city -- Iraq's second biggest -- in the northern province of Nineveh.

The abductees are "ok" and "safe," according to Iraqi Foreign Minister Hoshyar Zebari.

Iraq faces a major security threat as the army has looked unable to contain ISIL insurgency moving south toward capital Baghdad. Kurdish Peshmerga forces regained control of Kirkuk province on Wednesday after the ISIL seized parts of the city, which remains disputed among the central government and northern Kurdish administration.

In a statement released on Thursday, the U.N. Security Council condemned the raid on the Turkish consulate and called for the release of hostages. It also urged member countries to impose sanctions including assets freezes, travel bans and arms embargoes against the armed group.

U.N. Secretary General Ban Ki-moon said the abduction was "totally unacceptable" and the international community and Iraqi government must unite for rescue efforts.

The U.S. strongly condemned the abduction and pledged cooperation with the government of Iraq for having Turkish nationals released.

Both the White House and the State Department condemned the raid to the Turkish consulate.

Jennifer Psaki, State Department Spokesperson, said Wednesday: "We are in touch with the governments of Turkey and Iraq and stand ready to provide any appropriate assistance."

U.K. Foreign Secretary William Hague expressed 'deep concern' over the latest developments and the huge displacement taking place in the region, speaking to the BBC on Thursday. Secretary Hague ruled out any possible U.K. military intervention.

Sergei Lavrov, Russia's Foreign Minister, also expressed concern on Thursday for the chaos in Iraq, holding the U.S. and the U.K. responsible for the violence that has gripped the country.

Germany's foreign ministry also said that they are deeply concerned over the incidents taking place in Iraq and urged for the release of the abductees.

Swiss President and Chairperson of Organization for Security and Co-operation in Europe, Didier Burkhalter condemned the attack against the Turkish consulate in Mosul, Iraq and called for the unconditional and rapid release of the abducted consul and all other hostages.

Iyad Ameen Madani, Secretary General of the Organization of Islamic Cooperation, expressed "great concern" over the recent events in Iraq and called on all parties to "work towards a realistic national consensus."

"Necessary precautions must be taken against possible events that could threaten Iraq's integrity," Madani said.

ISIL militants captured another city besides Mosul in Nineveh province, Saddam Hussein's hometown Tikrit -- 140 km northwest of capital Baghdad -- as well as towns of Samarra and Tuz Khormato, all three within Salahuddin province.

The ISIL has also held control of western Anbar province since early January.