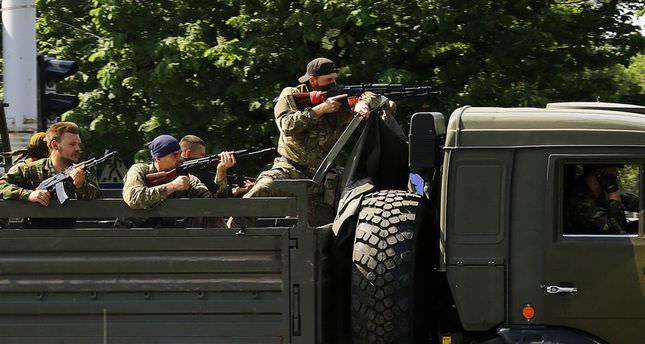 About 30 Ukrainian servicemen were wounded in fighting with pro-Russian separatists near Ukraine's eastern border with Russia early on Tuesday, the border guard service said.

It said separatist fighters had fired mortar bombs on government forces and border guards during the night near the city of Luhansk. It gave no details of any casualties among the rebels, who oppose central rule by Kiev's pro-Western leaders.

The separatists say government forces have been shelling their positions this week, including around the city of Slaviansk, scene of some of the heaviest fighting since the uprising began in the Russian-speaking east in April.

President Petro Poroshenko has ordered government forces to retake control of the border from the rebels after Kiev and the United States accused Russia of sending fighters and weapons, including tanks, across the frontier. Moscow denies this.

Poroshenko said on Monday that government forces had already re-established control of a more than 250-km (156-mile) stretch of the almost 2,000-km (1,240-mile) land border with Russia.

Kiev says 125 Ukrainian serviceman have been killed since the start of a military operation to defeat the separatists in May. Scores of separatist fighters have also been killed in fighting, as well as an unknown number of civilians.

The crisis in Ukraine erupted late last year when protesters took to the streets against a president sympathetic to Moscow. He was overthrown in February, Russia annexed the Crimea region in March and the uprising in the east began in April.