Ukraine's Poroshenko sets out ceasefire plan after call with Putin 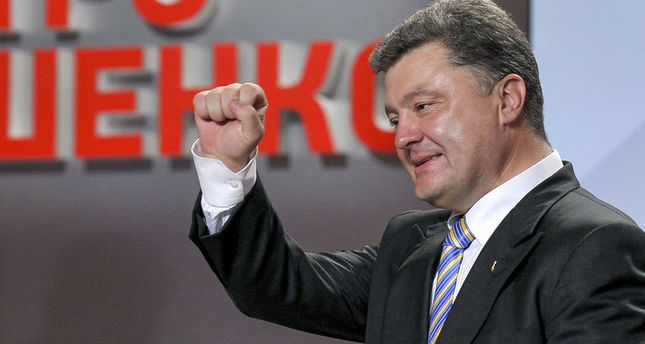 by Jun 18, 2014 12:00 am
After a late-night telephone call with Russian President Vladimir Putin, Ukrainian President Petro Poroshenko on Wednesday set out proposals for a peace plan for eastern Ukraine involving a unilateral ceasefire by government forces.

Speaking to students at a military institute in Kiev, Poroshenko outlined a 14-step plan, including an amnesty for separatist fighters who lay down arms, and tighter controls over Ukraine's border with Russia. Acting Defence Minister Mykhailo Koval told journalists in Kiev the ceasefire "will happen in the next few days".

Ukraine accuses Russia of backing the rebels in the industrial Russian-speaking east who rose up after mass protests in Kiev toppled Viktor Yanukovich, a president sympathetic to Moscow. It says the rebels have been bringing in weapons across the long border with Russia.

"The plan will start with my order for a unilateral ceasefire," Poroshenko said. "Immediately after this, we need very quickly to get support for the peace plan ... from all participants."

Poroshenko had said on Monday that a ceasefire could start only if the border was secure, and that he had ordered troops to regain control of it to pave the way for a truce and peace talks.

The Kremlin said Putin's conversation with Poroshenko late on Tuesday night had "touched on the theme of a possible ceasefire in the area of military action in southeastern Ukraine".

Moscow has urged a swift end to what it calls a "punitive operation" by Ukrainian forces against pro-Russian separatists in the east.

Relations between the two neighbours are in tatters, three months after Russia labelled the uprising against Yanukovich a Western-backed coup, then annexed the Black Sea peninsula of Crimea from Ukraine.

Moscow has grudgingly acknowledged Poroshenko as Ukraine's new elected leader, but tensions are still high, exacerbated by Russia's decision to cut off gas supplies to Ukraine after the two sides failed to agree a regime for pricing and the settlement of Ukraine's debts.