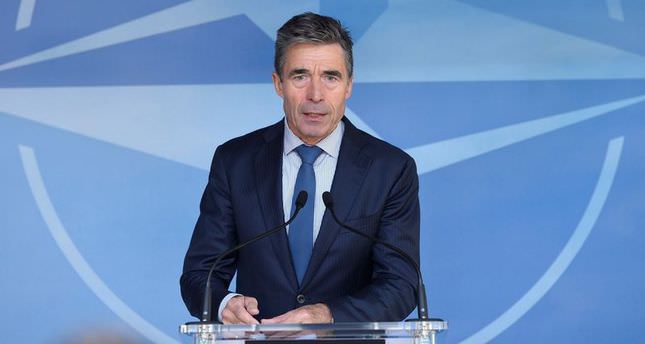 by AA Jun 25, 2014 12:00 am
NATO Secretary-General, Anders Fogh Rasmussen Wednesday reassured NATO's support for Turkey's defense and protection referring to the incidents in Iraq following the insurgency of the Islamic State of Iraq and the Levant.

Voicing his concern on the latest developments in Iraq, Rasmussen said NATO was in cooperation with its allies, including Turkey and that it would not hesitate to take the necessary steps to defend and protect Turkey.

ISIL militants, backed by tribal fighters, seized Iraq's second-largest city, Mosul, on June 10, instigating an insurgency that gripped a significant part of the country's north since then.

The Secratary-General Rasmussen also touched on the crisis in Ukraine and said NATO suspended its practical cooperation with Russia due to a stalemate in Russia's attitude to the Ukraine's issue.

Tensions continue to remain high in the eastern Ukrainian cities of Donetsk and Lugansk after they declared their intention in March to break away from Kiev.

Ukrainians fear a repeat of the situation in Crimea which was annexed by Moscow after a controversial referendum in March.

He expressed NATO's door remains open and no third country has a veto over NATO enlargement.

Rasmussen said that the ministers discussed the alliance's open door policy as well as the progress made by the four countries that aspire to join the Alliance: Georgia, Montenegro, Bosnia and Herzegovina, and the former Yugoslav Republic of Macedonia over a working dinner on Tuesday.

"Each country will continue to be judged on its merits. Each one has work to do in different areas, and we will give aspirants the support they need to get them through the door," the Secretary-General said.

Rasmussen noted that NATO's open door policy has been a historic success, spreading peace and cooperation across Europe in an unprecedented way, and added that the upcoming summit in Wales in September will mark that success and maintain the momentum.

The allies have agreed in principle to develop a substantive package for Georgia that will help it come closer to NATO, Rasmussen said, adding that the elements of the package will be worked out in the coming weeks.

"On Montenegro, we will open intensified and focused talks, and we will assess, at the latest by the end of 2015, whether to invite Montenegro to join the Alliance," he said.

Russia's response to these statements are yet to be seen as the country sees each enlargement step of NATO as a step taken against itself, and as an occasional threat, especially if the aspiring countries are close to their borders.

Rasmussen said that the ministers would advance today on preparations for the Wales Summit, which "takes place at a critical moment for our security, when we face old threats and new, from Eastern Europe to North Africa and the Middle East." He said that they would be reviewing the measures already taken to strengthen the alliance's collective defence.

"At the same time, we will agree on a package of long-term support measures for Ukraine, including the creation of new trust funds," the Secretary-General said.

"Russia's aggression against Ukraine led to the suspension of our practical cooperation, and I regret to say that we see no signs that Russia is respecting its international commitments. So today we will review our relations with Russia and decide what to do next."

He added that as Russia uses a different type of warfare against Ukraine, the alliance will discuss how to deal with ambiguous threats in the longer term.

Ukraine's Foreign Minister Pavlov Klimkin is expected to update the allies about the latest situation in the country at a meeting of the NATO-Ukraine Commission Wednesday.

The ministers are also scheduled to discuss the alliance's future relationship with Afghanistan, and take additional steps in planning a new mission to train, advise and assist the Afghan forces from next year.

Turkey's Foreign Minister Ahmet Davutoglu is expected to hold bilateral meetings with several of his counterparts during the course of the day.