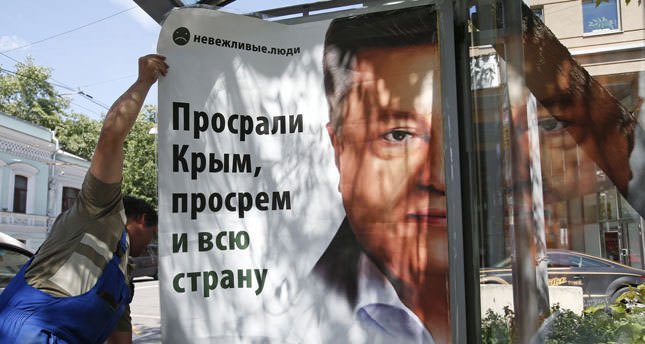 by Jun 30, 2014 12:00 am
The leaders of Russia and Ukraine have agreed to work on the adoption of a bilateral ceasefire between separatists and Ukrainian authorities as well as quickly setting up effective border controls, the French president's office said on Monday.

The statement followed a telephone conversation between German Chancellor Angela Merkel, Russia's Vladimir Putin, Ukraine's Petro Poroshenko and French President Francois Hollande, the second such call in as many days.

After what Hollande's office said was a long conversation, Putin and Poroshenko also agreed to work on the liberation of more hostages and prisoners and the organisation of "substantial tripartite negotiations," the statement said.

Petro had urged Putin on Sunday to strengthen Russian control over its borders to prevent militants and arms entering Ukraine after violence broke a truce there.

The ceasefire, declared by Poroshenko on June 20 to allow for peace talks with the pro-Russian rebels, was due to expire on Monday, a deadline also set by EU leaders considering new sanctions against Russia.

The European Union, which signed an historic free-trade pact with Ukraine on Friday, has warned it could impose more sanctions on Moscow unless pro-Russian rebels act to wind down the crisis in the east of the country by Monday.

Putin again urged an extension of the ceasefire in eastern Ukraine and setting up a control mechanism to monitor the truce with the participation of the OSCE security body , the Kremlin said in a separate statement after the talks.

"The leaders spoke in favour of convening a third round of consultations between Kiev and south-eastern regions as soon as possible," it added.