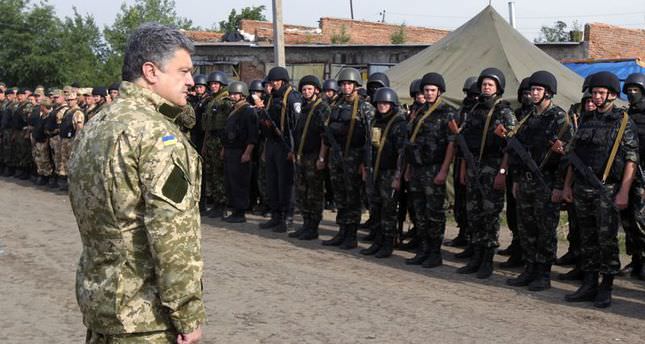 by Jul 01, 2014 12:00 am
Ukrainian government forces launched air strikes and artillery assaults on pro-Russian separatists in eastern regions on Tuesday, a military spokesman said, after President Petro Poroshenko announced he would not renew a ceasefire.

Poroshenko said in an early morning announcement that government forces would renew offensive operations against rebels and "free our lands", hours after a ceasefire to allow for peace talks with the pro-Russian separatists had expired.

"After the President's speech, the ATO (Anti-Terrorist Operation) went into action. We opened artillery fire, carried out air strikes at the strategic points of the terrorists and places where they are concentrated," military spokesman Oleksiy Dmytrashkovsky was reported as saying by Interfax news agency.

Dmytrashkovsky said rebels had fired on an SU-25 attack aircraft, damaging it, but the plane had manage to land safely at its air base. He denied a rebel report that a military helicopter had been brought down.

One Ukrainian serviceman had been killed and 17 wounded in the past 24 hours in rebel attacks on Ukrainian posts, he said.

The defense ministry confirmed that Ukrainian forces had launched attacks on the rebels "from the air and land".

"The terrorists' plan to significantly escalate armed confrontation has been disrupted and the threat of losses to the civilian population and service personnel has been liquidated," the ministry said on its website.

Poroshenko, who accuses Russia of fanning violence in eastern Ukraine, dismissed Moscow's offers to defuse the crisis, and accused the rebels of failing to keep to the truce or follow a peace plan he had outlined.