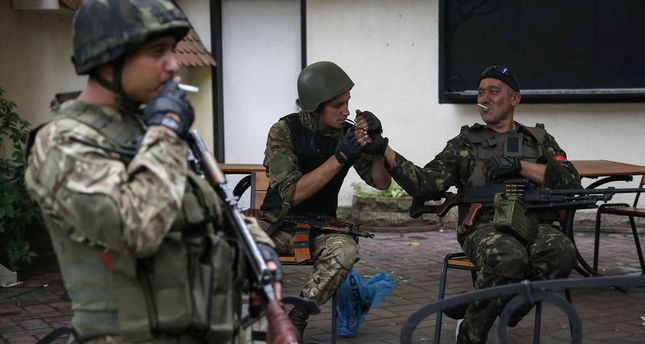 by AA Jul 07, 2014 12:00 am
The Ukrainian army has captured the eastern cities of Artemivsk and Druzhkivka from pro-Russian separatists, the Ukrainian presidency has said in a statement.

The seizures came a day after Ukrainian soldiers retook control of Slavyansk, a stronghold for separatists, who fled the city after weeks of siege.

The Ukrainian flag was raised over Artemivsk and President Petro Poroshenko ordered the cities to be demined, have their infrastructure repaired and food to be provided to the public, according to the statement on Sunday.

Ukrainian troops also gained control of the eastern cities of Kramatorsk and Kostiantynivka on Saturday, five days after a 10-day ceasefire ended.

Poroshenko had announced the temporary ceasefire on 20 June as part of a plan to resolve the unrest that has gripped the eastern part of Ukraine since April.

Violence has gripped Ukraine after autonomous Crimea was annexed by Moscow after a controversial referendum in March, which later inspired eastern Ukrainian cities of Donetsk and Lugansk to declare their intention to secede from Kiev.