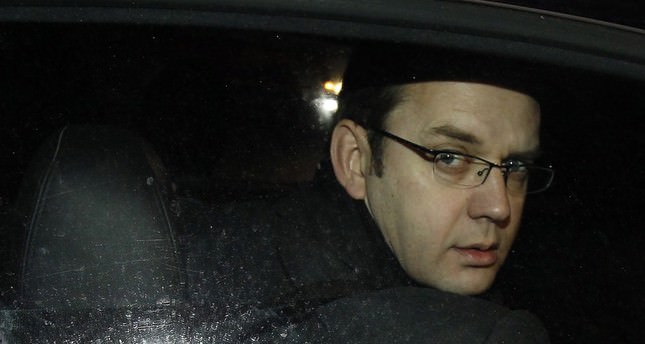 by Daily Sabah Jul 08, 2014 12:00 am
While the U.K. is perceived as having a largely open press, there have been many abuses by authorities to silence the media. Andy Coulson, the former editor News of the World, is the latest of 63 journalists to be arrested in the past three years.

The number of jailed journalist continue to increase in Britain as Andy Coulson, the former editor of Rupert Murdoch's News of the World, was jailed for 18 months on Friday. The sentence passed by a judge at the Old Bailey court in London caps a stunning fall from grace for 46-year-old Coulson, who was former communications director for the British Prime Minister David Cameron.

Murdoch shut the News of the World down in July 2011 amid public outrage after it emerged that Britain's biggest-selling paper had illegally accessed the voicemails of murdered schoolgirl Milly Dowler. Judge John Saunders said Coulson was receiving the longest possible jail term due to his senior role at the weekly paper.

Although the United Kingdom has created a perception that it has a largely open press environment, conditions for independent media and investigative reporting deteriorated in the last couple of years. Even the Freedom House - which is accused of preparing a biased pro-
Western press index - had stated that a number of negative developments stemmed from the British government's response to the revelations of surveillance by the American and British intelligence agencies provided by Edward Snowden.

"These included a raid on the newsroom of The Guardian newspaper, which broke the story, as well as negative verbal rhetoric and the threat of further legal action against the paper during the year. Meanwhile, the debate surrounding the reform of the self-regulatory framework for print media continued, with several newspaper owners at odds with the decision taken by parliament to establish a new body under a royal charter," the Freedom House said in its 2014 report.

In the U.K. the media can be required to turn over reporting materials to the police under the 1984 Police and Criminal Evidence Act. In the aftermath of the July 2005 terrorist bombings in London's mass transit system, the government passed the 2006 Terrorism Act. Certain provisions of the law criminalize speech that is considered to encourage terrorism, even in the absence of a direct, proven link to a specific terrorist act, the advocacy group said in its Britain report.

Press Gazette, a British media trade magazine dedicated to journalism and the press, reported that at least 63 journalists, including Coulson, have now been arrested in the last three years as a result of police investigations stemming from the phone-hacking scandal.

Britain came under the spotlight with dozens of arrests against journalists in 2013, however, arrests and threats against journalists continue in the country. For instance, a reporter for the local daily Sheffield newspaper, the Sheffield Star, was recently threatened with arrest under the Terrorism Act, as he attempted to film a protest against cuts to concessionary travel passes for pensioners and disabled people on June 23.

George Arthur, 64, and Tony Nuttall, 65, were also reportedly arrested after transport police and Northern Rail security staff confronted around 45 protesters following the latest in a series of "Freedom Rides"-named after U.S. civil rights actions - in opposition to changes to the system of free rail travel in South Yorkshire. A number of commuters managed to film as Arthur and Nuttall were handcuffed, arrested and bundled away.

Britain drew criticism as these incidents illustrate a growing trend in which the police and state have employed, or sought to employ the Terrorism Act. In January, British police sought to seize material from Channel 4 TV relating to their broadcasting of revelations provided by former U.K. intelligence operative and whistleblower Peter Francis.

In September 2013, Baraa Shiban, a Yemeni activist who was campaigning against the use of drones, was detained by British authorities and questioned under Schedule 7 of the 2000 Terrorism Act.
RELATED TOPICS