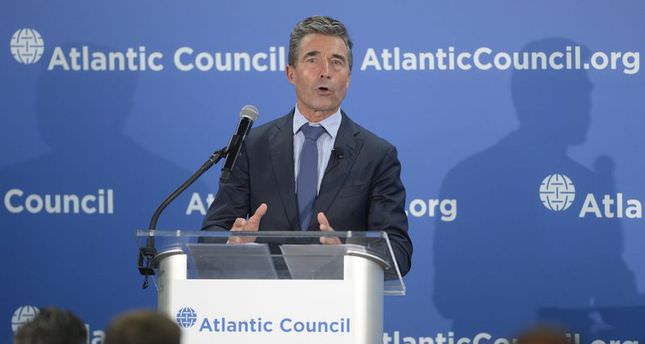 by AA Jul 08, 2014 12:00 am
An increasingly assertive Russia is undermining the legal underpinnings of the international community, said NATO's top leader Monday.

"Russia is not just trying to recreate a sphere of influence," Anders Fogh Rasmussen, the NATO secretary-general, warned while speaking at the Atlantic Council think tank in Washington. "It has dealt a dangerous blow to the international rules-based system we have built up over decades."

Rasmussen emphasized that putting an end to Europe's dependency on Russian energy is "of the utmost strategic importance."

"As we've seen in Ukraine, Russia is quite capable of turning off the taps," he cautioned.

Rasmussen is approaching the end of his nearly five-year term at the helm of NATO. He is in Washington on what is likely to be his last major public visit before Jens Stoltenberg assumes the top spot in October.

Stoltenberg will be faced with the fallout from successive face-offs with Russia over Ukraine and Syria that have tested the resolve of the transatlantic alliance, amid decreased defense spending from member countries.

Rasmussen said he will use an upcoming NATO summit in Wales from September 4-5 to call on NATO member states to live up to their defense spending obligations.

NATO guidelines stipulate that members are to spend two percent of their gross domestic product on defense.

Rasmussen lauded Estonia for joining the U.S., Greece and the U.K. in meeting the two percent benchmark, and said that Latvia, Lithuania, Poland, Romania and Turkey have committed to doing the same.

If all European allies met their two percent obligations this year, the alliance would have another $90 billion at its disposal, according to Rasmussen.

He will meet with U.S. President Barack Obama at the White House on Tuesday. The two leaders will discuss developments in Ukraine, improving allied defense spending, and NATO's post-2014 non-combat mission in Afghanistan, according to the White House.

The NATO chief will depart Washington for the U.S. city of San Francisco to deliver remarks at the Marines' Memorial Club and Hotel on July 9.