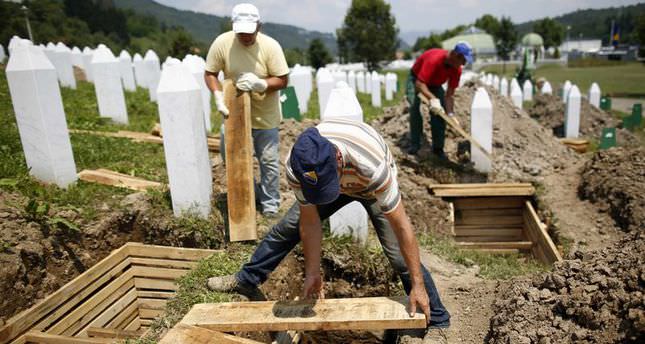 by AA Jul 09, 2014 12:00 am
Bosnia's representative on Bosnia-Herzegovina's power-sharing presidency warned Wednesday that unless people remember the genocides like those in Rwanda in 1994 and Srebrenica in 1995, similar events will happen elsewhere.

Bakir Izetbegovic made his remarks as the country commemorated the 19th anniversary of the slaughter in northeastern Bosnian town of Srebrenica. In July 1995, About 8,000 Muslim men and boys were rounded up by Bosnian Serb forces, separated from their families, and killed. Gen. Ratko Mladic, who commanded those forces, is now on trial in The Hague, Netherlands, accused of committing war crimes, crimes against humanity and genocide.

On the other hand, during 100 days between April and July in 1995, an estimated 800,000 Tutsis and moderate Hutus fell victim to a frenzy of killing, mostly with machetes, before the genocide was stopped.

"If you forget these kinds of incidents like Srebrenica, it will happen in other parts of the world" Izetbegovic said. "Therefore it is important to keep the memories fresh." Izetbegovic said. He spoke with a reporter for The Anadolu Agency at a reception in London for 19th anniversary of Srebrenica genocide.

He noted 175 newly-identified victims of Srebrenica Massacre will be buried in Potocari cemetery, on July 11 when the annual memorial ceremonies will be held. "There will be activities for the massacre across Europe, not only in Bosnia" he added.

"There are still genocides like Srebrenica taking place in the world," he said. "Wars of today are even more horrible because weapons are stronger."

He said the United Nations was not determined enough in the effort to secure peace in the world and noted the strongest countries bear the most responsibility for stopping wars and preventing genocide.

Izetbegovic pointed with alarm to the situation in the Middle East, where Israel and Hamas are exchanging rocket fire, and Israeli officials have not ruled out a ground offensive in Gaza.

"The world started to get used to Israeli violence -- horrible attacks towards Gaza once in a few years," he said, saying it is of urgent necessity to find a solution to the Israel-Palestine conflict enduring to provide normal life for Palestinians.