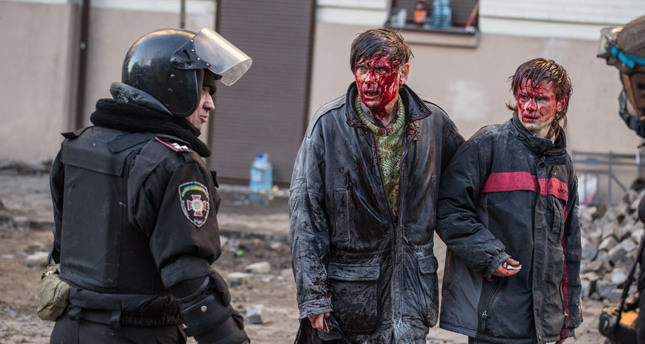 by Anadolu Agency Jul 11, 2014 12:00 am
At least 30 Ukrainian servicemen are dead after an artillery attack by separatists in the country's east, the Interior Ministry reports.
Separatists used a "Grad" multiple rocket launcher system to fire upon troops in the Luhansk region, close to the border with Russia, ministry official Zoryan Shkiryak said, according to local news reports. He added that the casualties figure might rise further.

The pro-Russian separatists launched their attack at around 5 a.m. on the border post at Zelenopillya, in Luhansk region, military sources said. "Up to thirty (were killed). It is not excluded that the number of victims will rise because these blood-thirsty scum despicably shot from Grad (missile) systems and there is destruction,"

Zoryan Shkyryak, an adviser to Interior Minister Arseny Avakov, told journalists. "I think a response will not be slow in coming after this bloody terrorist act," he said.

Government forces have recently been gaining the upper hand in a three-month battle with separatists who have set up 'people's republics' in the Russian-speaking east of the country and said they want to join Russia.

In mid-June, in Luhansk region, rebels downed a plane killing the 49 Ukrainian servicemen on board. The tide in Ukraine's worst crisis since its 1991 independence turned last weekend when resurgent government forces managed to flush out separatists from a string of eastern towns and cities they had seized in early April.

Most of the militias have since retreated to Donetsk and the neighboring industrial city of Luhansk - both capitals of their own "People's Republics" that refuse to recognize Kiev's new West-leaning government and are seeking annexation by Russia. The conflict has claimed the lives of more than 500 people, while Amnesty International said there had been "hundreds" of abductions and acts of torture committed by the separatists. An Amnesty report published Friday also said that "excessive force may have been used … by Ukrainian forces" on several occasions - a charge repeatedly made by Moscow. Ukrainian President Petro Poroshenko now finds himself trapped between European pressure to agree to an immediate truce and massive domestic support for his troops to finish off the insurgency that has threatened the 45-million-strong nation with disintegration and economic collapse.

Germany and France have been spearheading EU efforts to secure a truce and win promises from the Kremlin to stop meddling in Ukraine. They hope to avoid further European sanctions on Russia that might damage their energy and financial ties with Russia.

But they have found Poroshenko - boosted by recent successes on the battlefield and bound by promises made during the May election -increasingly unwilling to call off the offensive.

President Vladimir Putin has also refused to call on the rebels to disarm. The West sees this as a sign the Kremlin leader is intent on keeping the Ukrainian government destabilized as punishment for ruining his plans to fold the country into a new post-Soviet trade alliance.
Last Update: Jul 11, 2014 10:56 pm
RELATED TOPICS