Bosnia grieves on the anniversary of the Srebrenica massacre 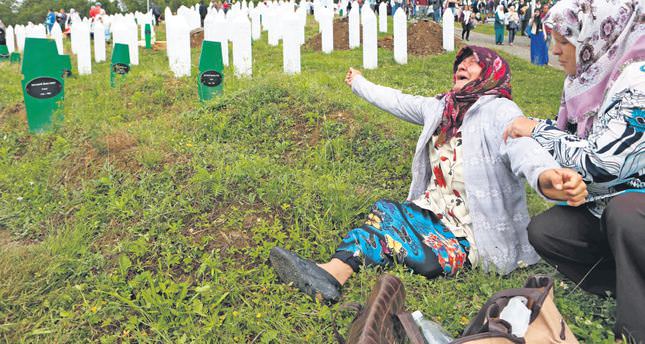 Thousands of mourners gathered on Friday to commemorate the 19th anniversary of the Srebrenica massacres, as 175 newly identified victims were buried in Potocari cemetery near Srebrenica

Thousands of people, including relatives of Srebrenica massacre victims, gathered at the Potocari memorial center, near Srebrenica to mark the anniversary of the tragedy.

After 19 years, the remains of 175 newly identified victims of the massacre were laid to rest after a commemoration ceremony. The youngest victim, who was buried this year, was 14-year-old Senad Beganovic. Among the others who will be buried are 13 teenaged boys, aged between 15 and 17. Hurem Begovic, the oldest, was 79.

The loved ones of the newly identified victims paid their respects before they were laid to rest. The commemoration ceremony took place after Friday prayers. Meanwhile, many officials from different countries, including Turkish Justice Minister Bekir Bozdağ, attended the ceremony.
Foreign Minister Ahmet Davutoğlu also said on his Twitter account on Friday, "Turkey will never forget the massacre against Muslim Bosnians in Srebrenica in July 1995."

During his visit to Uzbekistan, Davutoğlu said: "I commemorate all martyrs with mercy at the anniversary of this inhumane massacre in Srebrenica. Even though everyone forgets the Srebrenica massacre, we will not forget it."

Srebrenica, a predominantly Muslim city in Bosnia, was besieged by Bosnian Serb forces throughout the 1992-95 war. Bosnian Serb forces under the command of Ratko Mladic, are accused of the massacre of more than 8,000 Bosniacs -- men and boys -- in the town on July 11, 1995. During the war, Srebrenica had been declared a safe zone by the U.N. The bodies of victims were buried in mass graves across the region, and while some are still missing, those who are found are being identified using DNA technology.

In 2013, 409 Srebrenica victims, who were identified, were buried. According to AP, "The perpetrators had every hope that these people would be wiped out and never found again," said Kathryne Bomberger, head of the International Commission for Missing Persons, a Bosnia-based DNA identification project.

AP also reported that the commission, established in 1996, has collected almost 100,000 blood samples from relatives of those missing in the Yugoslav wars. It has analyzed their DNA profiles and is now matching them with profiles extracted from the estimated 50,000 bone samples that have been exhumed. "Here it is the end," whispers Ramiza Hasanovic, a woman in her 60s, standing near the freshly dug grave in which the recently found remains of her husband will be buried, told AFP.

AFP reported that two other graves were dug just next to it, one for her brother and another for her nephew. Two years ago in the same cemetery, Hasanovic buried her two teenage sons, Nihad and Mumin, aged 16 and 18, who were also killed during the massacre. "Here is my house, in the middle of those graves. This is my pilgrimage site; this is all I have. I come here when I can, I talk to them, I pray for them," whispered the woman with dark hair covered with a violet scarf.
Last Update: Jul 11, 2014 10:57 pm
RELATED TOPICS