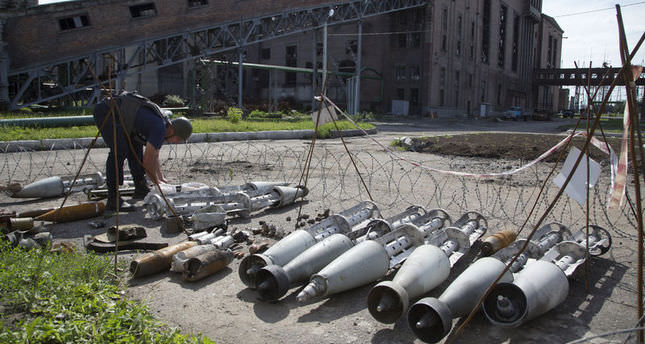 by Jul 11, 2014 12:00 am
A rebel attack with Grad missiles on a Ukrainian post on the border with Russia on Friday may have killed as many as 30 soldiers and border guards and final casualties may even be higher, an interior ministry official said.

If the casualty figures are confirmed, this would amount to the deadliest rebel attack on government forces since the Ukrainian military ended a unilateral ceasefire on June 30.

The pro-Russian separatists launched their attack at around 5 a.m. on the border post at Zelenopillya, in Luhansk region, military sources said.

"Up to thirty (were killed). It is not excluded that the number of victims will rise because these blood-thirsty scum despicably shot from Grad (missile) systems and there is destruction," Zoryan Shkyryak, an adviser to Interior Minister Arseny Avakov, told journalists.

"I think a response will not be slow in coming after this bloody terrorist act," he said.

Government forces have recently been gaining the upper hand in a three-month battle with separatists who have set up 'people's republics' in the Russian-speaking east of the country and said they want to join Russia.

Last weekend Kiev scored a notable victory by pushing rebels out of a stronghold in Slaviansk and forced them back to the main industrial city of Donetsk where they have now dug in.

But rebel attacks have continued steadily nonetheless in Luhansk region, where rebels also control strategic buildings in the regional capital.

In mid-June, in Luhansk region, rebels downed a plane killing the 49 Ukrainian servicemen on board.