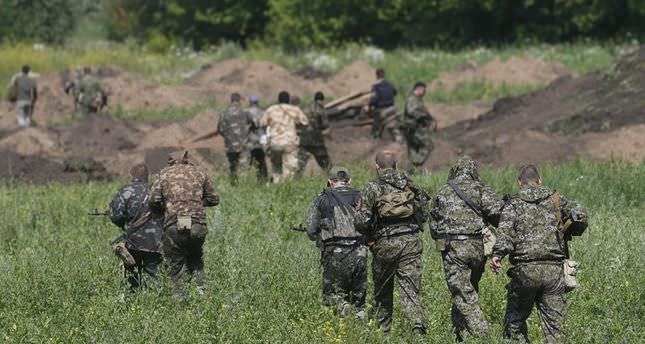 by AA Jul 15, 2014 12:00 am
At least eight civilians were killed Tuesday in clashes between the Ukrainian army and pro-Russian separatists in eastern rebel-held Lugansk city while an airstrike claimed four civilian lives in Donetsk.

According to the press service of Lugansk city council, eight civilians-including one child-were killed and another 52 wounded as a result of fighting in the city over the last 24 hours.

An early morning air offensive on Snezhnoe town in Donetsk Oblast hit a five-storey building, which collapsed in the attack leaving four civilians dead and injuring four others, said a statement from the local administration.

Andriy Lysenko, spokesperson for Ukraine's National Security and Defense Council, stated that the army suspended its military flights due to an ongoing search-and-rescue mission launched after pro-Moscow rebels shot down an army cargo plane late on Monday.

He claimed that the Snezhnoe bombardment had been carried out by an "unknown" plane that was not from the Ukrainian military citing its suspended flights and called it a "provocation."

Lysenko added that six security force personnel were killed during Monday's operations and 12 others wounded.

Fighting between Ukrainian forces and armed pro-Russian separatists has lingered in the country's restive eastern provinces.

A ten-day ceasefire ended June 30, but Ukrainian troops re-launched their operation against secessionists mainly in Lugansk and Donetsk. In Slavyansk city where separatists laid siege weeks ago, the Ukrainian army made a major gain by seizing back control of the rebel stronghold on Saturday.

Last week six Russian regions declared a state of emergency to cope with the influx of refugees from Ukraine.