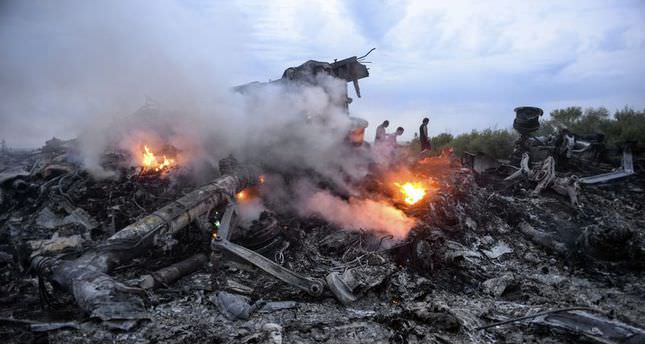 by AA Jul 18, 2014 12:00 am
Pro-Russia separatists in eastern Ukraine say they have found the black box belonging to a Malaysia Airlines Boeing 777 which crashed Thursday night close to the country's border with Russia killing all 295 people on board.

Russia's Interfax news agency announced that the separatists had said that they planned to send the black box to Moscow to determine the reason for the crash.

Ukraine President Petro Proshenko said 'terrorists' shot down the civil passenger aircraft of Malaysia Airlines which was flying from Amsterdam to Kuala Lumpur at an altitude of 10,100 meters.

Poroshenko called for the establishment of an international commission to investigate the incident in a statement posted on the presidential website late Thursday night.

The commission will include experts from the International Civil Aviation Organization and representatives from Malaysia and the Netherlands, according to the statement.

Ukraine Interior Ministry adviser Anton Gerashenko said on his Facebook page earlier Thursday that the plane was "shot down with a Buk anti-aircraft system by terrorists."

Gerashenko's claim could not be verified independently.

The Ukraine government uses the term "terrorists" in relation to pro-Russia separatists it is battling who are seeking to unite the east of Ukraine with Moscow.

Malaysia Airlines said in a statement Thursday that it had received "notification from Ukrainian ATC that it had lost contact with flight MH17 at 1.41 (GMT) at 30km from Tamak waypoint, approximately 50km from the Russia-Ukraine border."

It added that Flight MH17 operating on a Boeing 777 departed Amsterdam at 12.15pm (Amsterdam local time) and was estimated to arrive at Kuala Lumpur International Airport at 6.10 am (Malaysia local time) the next day.

Turkish Airlines press adviser Ali Genc told the Anadolu Agency Thursday that the airline will not use Ukrainian airspace until it is clearer what happened to Flight MH17.

Other airlines, including Lufthansa, Air France and Transaero, have postponed plans to fly over eastern Ukraine until further notice.
Tensions on the Ukraine-Russia border have risen dramatically since Ukrainian forces ousted separatists from its eastern city of Sloviansk.

Russia has shifted more troops towards the border area. On the weekend, a Russian civilian was killed by shellfire Moscow claimed came from Ukraine forces.