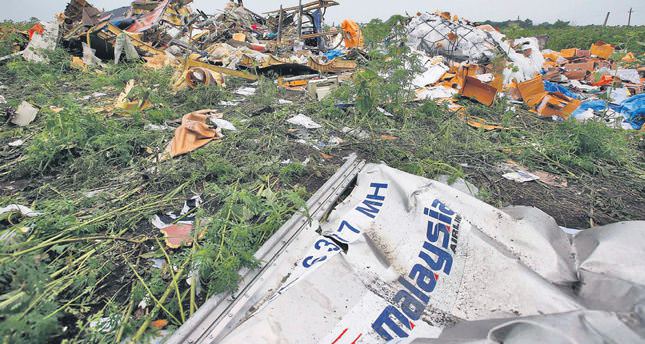 The shooting down of a Malaysian airliner over war-torn eastern Ukraine with 298 people on board has left many questions unanswered, paving the way to escalating global outrage, as world leaders call for a full investigation

Pro-Russian separatists have not given any access to Ukrainian investigators since Thursday, as they consider themselves the sole authority over the area. The groups stated on Thursday night that they had the plane's black box from the crash site in Hrabove, a rebel-held village in Ukraine's Donetsk region, and are planning to hand it over to the Russian authorities, according to Moscow-based wire agency Interfax. Ukrainian authorities, having no access to the crash site, have called for an international probe to investigate who attacked the plane, for the integrity of the plane crash investigation.

As neither Ukraine nor pro-Russian separatist groups have taken the responsibility for the tragic Malaysian plane crash so far, U.S. intelligence authorities claimed that the plane was shot down by a surface-to-air missile, without giving any details about who fired it. "All roads lead to the Russians to some degree," said a U.S. official, according to the Washington post, as the United States has criticized the Russian government of supporting the separatist groups in eastern Ukraine while providing assistance to them in order to fight Ukrainian government forces. As the separatist leader blames Kiev government for downing the Malaysian jet, the Ukraine government has called it a terrorist act.

As the Malaysian jet was shot down on the Russian border, many world leaders called for a full investigation in order to determine whether the missile was launched by pro-Russian separatist rebels or not.

Malaysia's Prime Minister, Razak Najib said during a press conference yesterday morning, "no stone will be left unturned," adding that "f the plane has indeed been shot down and Malaysia will insist that the perpetrators be swiftly brought to justice." Malaysian PM also stated that he received a call from the United States President Barack Obama guaranteeing a thorough investigation.

Reports show that 27 Australian citizens were killed in the Malaysia Airlines jet downing and Australian Prime Minister Tony Abbott blamed Russia yesterday for the catastrophe, while "demanding that Moscow answer questions about the 'Russian-backed rebels' whom he has thought, were behind the disaster. "This is a grim day for our country and it's a grim day for our world. Malaysian airlines MH17 has been shot down over eastern Ukraine, it seems by Russianbacked rebels," said Australian PM while describing the plane crash "as a tragic accident when you have Russian proxies using Russian-supplied equipment to do terrible things."

After Russian President Vladimir Putin blamed Kiev for renewing its offensive which led to the escalating tension between Ukraine and the separatist groups, the Ukrainian Prime Minister Arseniy Yatsenyuk yesterday urged Ukrainians for a full embargo on bilateral trade with Russia, as Interfax-Ukraine news agency reported. "My forecast is as follows: We need to get ready for a practically full embargo on trade with Russia in the bilateral format," said PM Yatsenyuk. He also called for an emergency meeting of the United Nations Security Council, describing the downing of the Malaysian jet as "war against the world."

German Chancellor Angela Merkel called Russia yesterday to "work toward a political solution in Ukraine," according to Reuters.

In a statement earlier yesterday, pro-Russian separatist groups who control the area also vowed to provide "safe access and security guarantees" to both national and international investigators at the crash site, as the Organization of Security and Cooperation in Europe (OSCE) indicated.

The Vienna-based security body which has been monitoring the security situation in eastern Ukraine since the crisis broke out called for a crisis meeting yesterday to discuss the flight crash. "A special Permanent Council meeting took place yesterday at 12:30 pm Vienna time on the tragic crash of Malaysia Airlines flight MH17 in eastern Ukraine," the OSCE said in a statement, according to AFP news agency.

Didier Burkhalter, OSCE Chairpersonin-Office and Swiss Foreign Minister, stated in a press release on Thursaday that "the circumstances which led to this tragedy had to be investigated in a thorough and impartial manner and commended Ukraine's readiness to involve international expertise," while reiterating the organization's support for Ukraine in deescalating the ongoing crisis.

Eurocontrol, an international organization for air traffic management have declared that the flight route over Ukraine has remained closed. "All flight plans that are filed using these routes are now being rejected by Eurocontrol. The routes will remain closed until further notice," according to a statement released yesterday. "The usual flight route was earlier declared safe by the International Civil Aviation Organization," the Malaysian airline said in a statement yesterday morning, In addition, many airlines, including Turkish airlines was declared that they will avoid Ukrainian airspace.
Following the disappearance of Beijing- bound flight MH370 after it left Malaysian airspace on March 8, the Malaysia Airlines flight MH 017, en route from Amsterdam to Kuala Lumpur, has become the second Malaysian airliner which has been subject to an unfortunate.

There were reportedly 298 passengers and crew on board, including 283 passengers and 15 crew members. MH017 was reportedly carrying at least 173 Dutch nationals, 27 Australians, 44 Malaysians, 12 Indonesians and 9 British. As tension on the Ukraine-Russia border have escalated dramatically since Ukrainian forces have gained significant ground against separatists in the eastern city of Sloviansk, both sides have been accusing each other of shooting down the Malaysian jet.
RELATED TOPICS