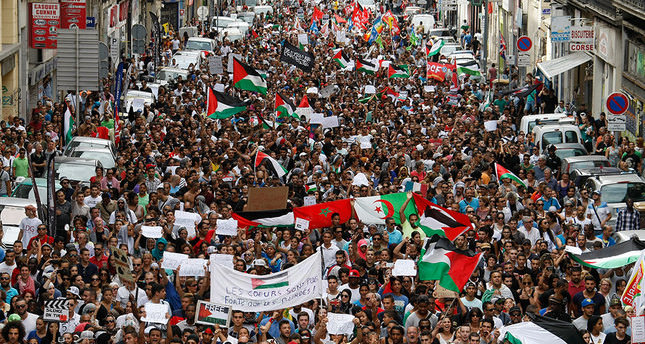 by AA Jul 20, 2014 12:00 am
Up to 33 people have been detained and two police officers and three gendarmes wounded during pro-Palestine protests in Paris.

The arrests came after 3,000 French protesters defied a ban on demonstrations in the French capital on Saturday, held in solidarity with the people of Gaza as Israel escalated its offensive.

Other authorized protests were held on Saturday in 15 other cities around the country to protest against the onslaught in which at least 341 Palestinians have been killed and nearly 2,560 injured, according to Palestinian health officials.

The Parisians gathered in the Barbes Square in Paris on Saturday afternoon, chanting slogans supporting Gaza and burning the Israeli flag.

The police dispersed the demonstrators using tear gas, preventing them from marching into the city center.

Ülfet Das, an electrical engineer of Turkish origin living in Paris, told Anadolu Agency: "Where are liberty, equality, fraternity? We cannot see them."

He said the ban was meaningless considering that the right to assembly and protest were protected by the French Constitution.

Das said organizers had expected about 100,000 people would have shown up if the demonstrations had not been banned.

Pascal Troadec, deputy mayor of Grigny, was among the protesters.

"We cannot stay silent when hundreds of people are dying in Palestine," he said.

French President Francois Hollande, who is currently visiting Chad, said earlier in the day that those who refused to comply with the ban on pro-Palestine rallies in the French capital would be brought to justice.

Hollande told a joint press conference with his Chadian counterpart, Idriss Deby, in Chad's capital, N'Djamena: "Those who refuse to obey ... will assume their responsibility before the criminal court.

Despite the warning and ban, many organizations called on supporters of the Palestinian cause to rally.

The New Anti-Capitalist Party had criticized the ban in a statement late on Friday, saying: "This outrageous decision, based on the alleged risk of 'disturbing the public order,' is a serious infringement of democratic rights and freedom.

"Across the world, demonstrations against the operation in Gaza are organized. France is the only country to ban them."

The League of Human Rights also lashed out at the ban, deeming it to be "a manifest obstacle to constitutional liberty and a denial of reality".

Israel has been pounding the Gaza Strip, home to 1.8 million Palestinians, since 7 July with crippling air and naval bombardments with the stated aim of halting rocket fire emanating from the strip.

Israel stepped up its offensive to include ground operations on Thursday night, sending troops into the embattled coastal enclave.