Ukraine: Rebels have taken all bodies from plane crash 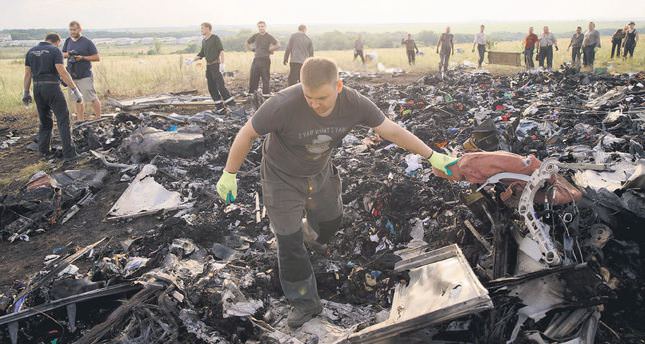 Separatist rebels have taken all the 196 bodies that workers recovered from the Malaysian Airlines crash site away to an unknown location, Ukraine's emergency services said

The Ukrainian government accused pro-Russian separatists of forcing recovery personnel at the Malaysia Airlines crash site to hand over the bodies. Ukraine and the separatists are accusing each other of firing the missile that downed the plane.

Associated Press journalists saw the pro-Russia rebels putting bagged bodies onto trucks at the crash site Saturday in rebel-held eastern Ukraine and driving them away.

On Sunday morning, AP journalists saw no bodies at the crash site and emergency workers were searching the sprawling fields only for body parts. No armed separatists were seen at the site.

Ukraine and the separatists accuse each other of firing a surface-to-air missile Thursday at Malaysian Airlines Flight 17 as it flew from Amsterdam to Kuala Lumpur some 33,000 feet (10,000 meters) above the battlefields of eastern Ukraine. Both deny the charge. All of those on the plane, 283
passengers and 15 crews, were killed.

Ukrainian Emergency Ministry spokeswoman Nataliya Bystro said Sunday that recovery workers in the rebel-held territory had been laboring under duress and were forced to give the bodies to the armed gunmen. "We do not know where they took the bodies," Bystro told The Associated Press.
Separatists were not immediately available Sunday morning to comment on her statement.

News reports of how the bodies had been decaying for days in the summer sun had ignited outrage worldwide, especially from the Netherlands, home to over half the victims.

Alexander Pilyushny, an emergency worker combing the crash site for body parts Sunday morning, told the AP it took the rebels several hours to take away the bodies on Saturday. He said he and other emergency workers had no choice but to hand the bodies over to the rebels. "They are armed and we are not," Pilyushny said. "The rebels came, put the bodies onto the trucks and took them away somewhere."

Neither Bystro nor Pilyushny could explain what happened to the 102 bodies of plane victims that have not yet been recovered. Earlier, the Ukraine government claimed it had reached a preliminary deal with the separatists to remove the bodies.

The U.S. has pointed blame at the separatists, saying Washington believes the jetliner was probably downed by an SA-11 missile from rebel-held territory and "we cannot rule out technical assistance from Russian personnel."

The latest U.S. intelligence assessment suggests that more than one missile system was given to the separatists by the Russians in the last week or so. But both Russia and the rebels vehemently deny any role in downing the plane.

Despite calls by world leaders for an independent, international investigation into the plane's downing, armed separatists limited observers' access
to the crash site on Friday and Saturday. "We have to be very careful," said Michael Bociurkiw, a spokesman for the 24 international monitors. "We are unarmed civilians, so we are not in a position to argue with people with heavy arms."

The U.S. State Department described the rebels' refusal to give monitors a full access to the site "an affront to all those who lost loved ones and to the dignity the victims deserve."

Despite the restrictions seen by journalists and observers at the crash site, separatist leader Alexander Borodai insisted the rebels have not in any way interfered with the work of observers.

The Dutch led the way in outrage over how the victims' bodies were being treated. "The news we got today of the bodies being dragged around, of the site not being treated properly, has really created a shock in the Netherlands,"

Dutch Foreign Minister Frans Timmermans told the Ukrainian president in Kiev on Saturday. "People are angry, are furious at what they hear."

Timmermans demanded that the culprits be found. "Once we have the proof, we will not stop until the people are brought to justice," he said.