EU and Arab League call for a ceasefire in Gaza 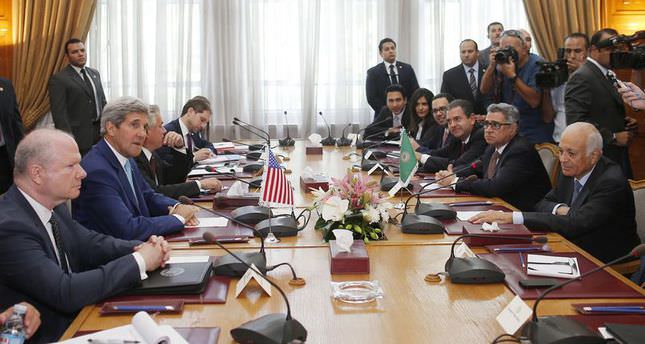 by AA Jul 23, 2014 12:00 am
The Arab League along with Palestinian, Jordanian and Egyptian ambassadors in Moscow called on the international community to ask Israel to stop their operations in Gaza and contribute towards the ceasefire on Tuesday.

The Palestinian ambassador referred to the Israel's 15 day bombardment of Gaza and said, "This is an immoral war aimed at eliminating us, our freedom, our future and our dream of founding an independent state."

"Due to Israel's operations, 609 Palestinians died, 3,650 are wounded, and 2,200 houses are partially or completely demolished and 18,460 buildings are damaged," Mustafa said.

"Moscow is in an impartial position in international relations. It has always played an important role in the Middle East and we hope Moscow will take an active role to support Arabic countries on the Israeli-Palestinian issue," Mashta stated.

Additionally, the European Union Foreign Ministers condemned Israel's killings in Gaza and expressed their shock and deep concern on the escalation of Israel's bombardment and the launching of rockets by Hamas and called for an immediate ceasefire.

The EU Foreign Ministers urged for both parties to fulfill their responsibilities on delivering humanitarian aid in a secure and complete way and carry out an immediate ceasefire in good faith.

EU Foreign Ministers' decision also stated they are ready to contribute towards a comprehensive and sustainable solution to meet the economic, safety, and humanitarian needs of Palestinians and Israelis including the re-activation of the EU mission at Rafah bordergate if the conditions are suitable.