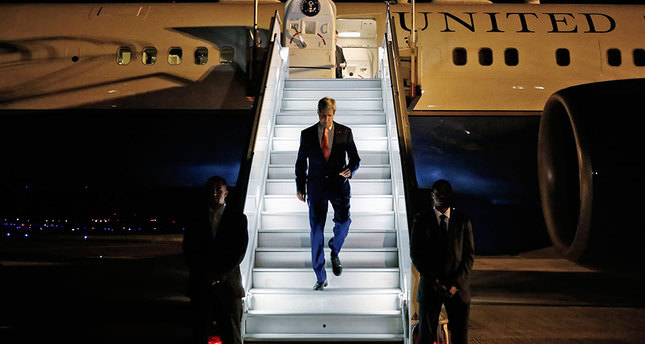 by Jul 26, 2014 12:00 am
US Secretary of State John Kerry and other top diplomats from Europe and the Middle East began talks in Paris Saturday to press efforts for a long-term ceasefire between Israel and Hamas.

Kerry met with French Foreign Minister Laurent Fabius and their counterparts from Britain, Germany, Italy, Qatar, Turkey and the European Union as a 12-hour "humanitarian" truce in Gaza entered into force.

More than 950 Palestinians -- a large majority of them civilians -- have died in a 19-day Israeli offensive on Hamas.

The Israeli army meanwhile has suffered 37 casualties and world powers are rushing to try and negotiate a lasting ceasefire to avoid more deaths.

"It's now about reaching a common position that we must put an end to the deaths," German Foreign Minister Frank-Walter Steinmeier said before the talks began.

Kerry, who has been leading international efforts to reach a truce, has been in regular contact with the foreign ministers of Turkey and Qatar as both countries yield influence on Hamas.

Hamas chief Khaled Meshaal is based in Qatar, while Turkey's Islamic-oriented Prime Minister has strongly criticised Israel's assault on Gaza as well as Egypt's role in trying to clinch a ceasefire.

Kerry failed to secure a lasting deal in Cairo Friday where he met with his Egyptian counterpart Sameh Shoukri and UN chief Ban Ki-moon.

The United States has worked with Egypt on a plan that, diplomats say, would provide a seven-day truce during which the two sides would negotiate a longer-term deal.

But while Israel and Hamas agreed to the temporary ceasefire on humanitarian grounds, they have rejected any form of lasting truce.

Unlike his predecessor Mohamed Morsi whom he toppled and detained last year, former military chief and current leader of Egypt Abdel Fattah al-Sisi has sought to isolate the Palestinian movement in the neighbouring Gaza Strip.

Egypt's foreign minister was pointedly absent from the Paris meeting, which France dismissed by saying that Egypt was still closely associated with the talks.

Speaking in Cairo Friday after his plan was rejected, Kerry said Israel and Hamas "still have some terminology" to agree to on a ceasefire, but added they had a "fundamental framework" on a truce.
Still, the two sides remain at odds over the shape of a final deal.

Hamas says any truce must include a guaranteed end to Israel's eight-year blockade of Gaza, while in Israel there are calls for any deal to include the demilitarisation of the Gaza Strip.