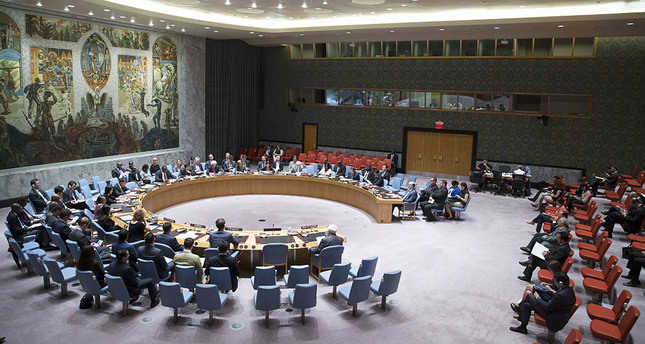 by AA Jul 28, 2014 12:00 am
The UN Security Council has called for an "immediate and unconditional" humanitarian ceasefire in Gaza between Israeli forces and Palestinian resistance factions "into the Eid period and beyond".

The presidential statement was issued on Monday morning after a seven-minute emergency session held shortly after midnight, as Muslims began celebrating the Eid al-Fitr holiday marking the end of the fasting month of Ramadan.

The rotating president of the Council for July, Rwandan UN's Ambassador Eugene-Richard Gasana, read the statement, saying: "The Security Council calls for full respect for international humanitarian law, including the protection of the civilian population."

The statement also expressed the Council's "strong support" for UN Secretary-General Ban ki-Moon, who had called for "trust" on both sides in Gaza, and commended the ongoing engagement of US Secretary of State John Kerry for "efforts in this regard".

But Palestinians and other Arab states in the UN voiced disappointment, saying they had been hoping for a statement which would clearly condemn Israeli aggression in Gaza which has left more than 1,000 people dead, mostly civilians, and injured more than 6,000 others.

The Permanent Observer of the State of Palestine to the United Nations, Riyad Mansour, said the Palestinian delegation to the UN would continue to push for a tougher statement, emphasizing the Council's responsibility toward international peace and stability.

He said he would continue to call for the withdrawal of Israeli military forces from the part of the Gaza Strip where they had entered under "Operation Protective Edge".

Mansour said: "We were hoping that, with this presidential statement, that element would be at least have been reflected in a call to Israel to withdraw to outside the Gaza Strip.

"They should withdraw immediately."

He added: "We will continue to knock on the door of the Security Council, so that it will show its responsibility.

"We will not accept the Security Council continuing to drag their feet and acting as this a small issue."

But a UN expert warned the reality was that Palestinians should not expect additional action from the UN Security Council until the three Western nations with veto powers - the US, Britain and France - showed the will for such a resolution to be adopted, calling for the "sanctioning, or rebuking, of Israel for the atrocities being committed in Gaza, including war crimes".

Thalif Deen, a UN analyst and author based in New York, told Anadolu Agency: "The tragedy of the Security Council is that the other two veto-wielding powers, China and Russia, have been browbeaten to a point where they are not even daring to bring an anti-Israel resolution."

He said they were behaving in such a manner "even in closed door, informal sessions, let alone in the Security Council itself".

Deen said: "The three Western nations piled up four resolutions against Syria, while conscious of the fact that all of them would be vetoed by China and Russia, and embarrassed the two countries for being 'serial veto-wielders'.

"The bottom line is that Security Council votes and vetoes are based not on principles, but only on perceived national interests."

The presidential statement was the first document from the UN Security Council on Palestine since resolution 1860 was adopted in 2009 during Israel's "Operation Cast Lead", which called for an immediate ceasefire after 13 days of fighting between Israel and Hamas.

A total of 1,440 mostly non-combatant Palestinians were killed in the Israeli incursion, according to the Palestinian Ministry of Health, including many women and children.

The Council also welcomed an international meeting scheduled for July 26 in Paris to support the ceasefire and consolidate an agreement between the parties.