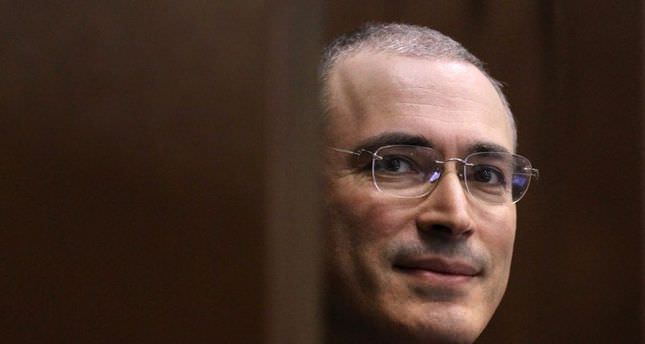 by Associated Press Jul 29, 2014 12:00 am
An international court ordered Russia on Monday to pay Yukos shareholders a record $50 billion compensation over its seizure of the defunct oil giant, a new blow for Moscow on top of sanctions over the Ukraine crisis.


Russia swiftly vowed to contest the ruling by the arbitration court in The Hague, saying it had no jurisdiction over the fate of the company once owned by jailed Kremlin critic and ex-tycoon Mikhail Khodorkovsky.

Lawyers for the claimants said the court ruled that Moscow had forced Yukos into bankruptcy with outsized tax claims, and then sold its assets to state-owned firms led by energy giant Rosneft for political purposes.


Yukos was once Russia's biggest oil company but was broken up after Khodorkovsky was arrested in 2003, shortly after President Vladimir Putin warned Russia's growing class of oligarchs against meddling in politics.

The former chief financial officer of Yukos Bruce Misamore described Russia's actions as "orchestrated state-sponsored theft" and urged the court to ensure that stakeholders were adequately compensated, saying in a statement that the ruling "will prove important to future litigation" against Russia.
Tim Osborne -- executive director of GML Ltd, the main shareholder and claimant in the case -- told a news conference in London that the tribunal "unanimously confirmed that the attacks by the Russian Federation on the Yukos oil company... were politically motivated".

The award was the "largest in arbitration history", GML said, putting the amount of compensation at $50 billion, half the $100 billion (74 billion euros) claimants originally sought nearly a decade ago.

Russia's economy is already in the spotlight over the escalating crisis in Ukraine, with companies close to Putin's regime braced for tougher Western sanctions over Moscow's role in the conflict.

Osborne said the Yukos ruling would hurt investment in the country.
"I suspect at the moment Russia is a place where not many people are going to be investing," he said.
Last week Russia's central bank unexpectedly raised interest rates in a bid to protect the ruble from capital flight, which is estimated at some $75 billion already this year.
Putin in May went on a charm offensive at the St Petersburg International Economic Forum, promising guests that Russia was a reliable destination for their capital despite its growing international isolation.


Khodorkovsky -- who is no longer a shareholder and is not a party to the legal proceedings -- called the verdict "fantastic" and slammed Russian leaders.
"The Yukos case has been an instance of unabashed plundering of a successful company by a mafia with links to the state," said a statement issued by Khodorkovsky, who was released last year after more than a decade in prison in Russia.

Yukos was sold off in opaque auctions to state companies led by Rosneft between 2004 and 2006. State-owned Rosneft was then a small player but today stands as the world's biggest listed oil company by production volume.

The finance ministry said in a statement that Moscow will "contest the decisions of the arbitration court... and expects to get a fair result," adding that in its view the court "had no jurisdiction" to consider the case.

Rosneft -- which is targeted by US sanctions over Russia's actions in Ukraine -- said all its dealings in respect of Yukos were "fully lawful".
The claimants will now try to prove in international courts that Rosneft is the "alter ego of the state", meaning that if Moscow does not pay up they can seize the energy giant's international assets, their main lawyer Emmanuel Gaillard said.

"It can be carried out voluntarily, or it will be implemented forcibly," lawyer Konstantin Lukoyanov of Linklaters told ITAR-TASS news agency.

"In that case the seizure of assets abroad is possible. There have been several similar cases."

Osborne, when asked whether claimants would consider pursuing British energy giant BP -- a 20-percent shareholder in Rosneft -- warned: "I think it is safe to say that nobody is safe."