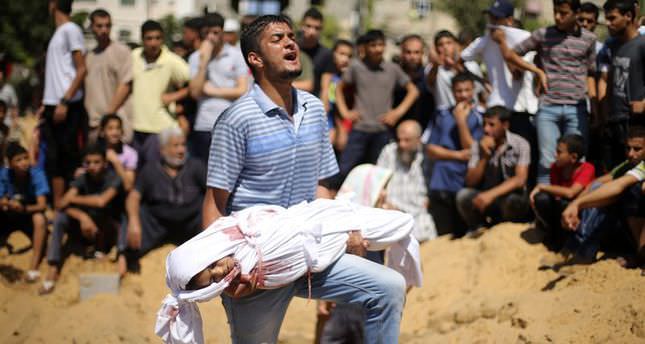 by Aug 04, 2014 12:00 am
Palestinian groups, including representatives from Hamas and Islamic Jihad, held their first formal meeting in Cairo on Monday with Egyptian mediators hoping to pave the way towards a durable ceasefire agreement with Israel.

Talks focused on a list of demands agreed by the Palestinian factions on Sunday, including an appeal to Egypt to ease movement across its own border crossing with blockaded Gaza. It was not clear how far the talks would progress as Israel declined to send its envoys as scheduled.

Palestinian demands include a ceasefire, the withdrawal of Israeli forces from Gaza, the lifting of the blockade on the area, the release of prisoners and the start of a reconstruction process, delegation members said on Sunday.

Israel has declined to send envoys to the peace talks.

The talks began at noon (09:00 GMT) under the auspices of Egypt's powerful intelligence service. Egyptian diplomatic sources said that while Cairo might contemplate easing the limited freedom of movement across its border with Gaza, it was unlikely to accept Palestinian calls to allow a normal flow of trade.

Egypt insists that any discussion over the Rafah border crossing take place bilaterally with the Palestinian Authority rather than as part of any overall deal between the Palestinians and Israel to ease the Israeli blockade, the sources say.

Like Israel, Egypt opposes Hamas and has long positioned itself as a mediator in successive conflicts in Gaza but has struggled to seal a deal in the latest fighting.

Media speculation that U.S. Deputy Secretary of State Bill Burns would fly to Egypt to participate in indirect truce talks had not been borne out by Monday. A U.S. embassy official declined to say if or when Burns might arrive.

A U.S.-U.N-brokered ceasefire proposal broke down within two hours on Friday, with Israel and Hamas trading blame.

Gaza officials say 1,804 Palestinians, most of them civilians, have been killed and more than a quarter of its 1.8 million residents have been displaced. Israel has confirmed that 64 soldiers have died in combat, while Palestinian shelling has also killed three civilians in Israel.