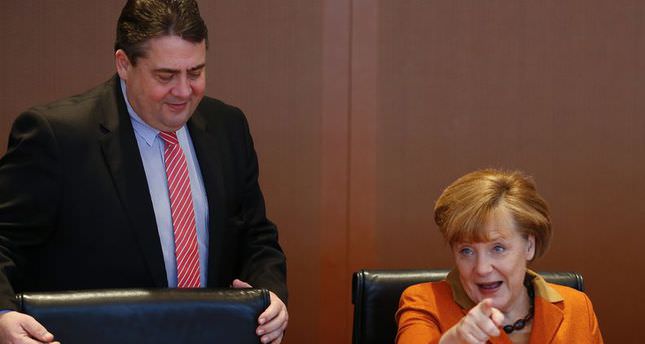 by French Press Agency - AFP
Aug 04, 2014 12:00 am
Germany has stopped a major deal to provide a fully equipped training camp to Russian forces due to the crisis in Ukraine, the government said Monday.


Vice Chancellor and Economy Minister Sigmar Gabriel said he has withdrawn his authorisation for the training camp project, which had already been put on hold in March after Moscow's annexation of Ukraine's Crimea region.

He confirmed a report in the daily Sueddeutsche Zeitung citing the decision to scrap the contract, reportedly valued at 100 million euros ($134 million).


"We consider it indefensible in the current situation," a ministry spokeswoman said later when asked about the move.

Russia previously called the decision to halt the arms deal "unconstructive," accusing Berlin of acting under pressure from the United States.


German defence group Rheinmetall, the contractors for the military training camp, had said in March that the company would fulfil its contractual obligations to build the centre, which German media said would train 30,000 soldiers a year.

The camp was to have been built in the Volga region, and was scheduled to open later this year.

The ministry spokeswoman said that the government was in contact with the firm, which will have the opportunity to claim financial damages for the scrapping of the contract.


By stopping the deal, Germany goes beyond economic sanctions against Russia agreed last week by the European Union.

Those restrictions ban arms exports to Russia but do not cover existing contracts, including a 1.2-billion-euro deal by France to deliver two Mistral warships to Russia.


Paris has said it would go ahead with the sale of the first vessel, drawing criticism from European partners including Germany and Britain.


"The European Council decided what it decided... but if at the end of the negotiations there were to be an improvement, we would welcome it," the spokesman, Georg Streiter, told reporters.


But the alleged shooting down of Malaysia Airlines flight MH17 by pro-Moscow rebels with a Russian-made missile last month led the EU's top economic power to adopt a firmer line.